Today I’m interviewing another of my Clarion classmates who self-published a novel this year, Grady Hendrix. His novel, the irreverent Satan Loves You, is a humorous fantasy about what happens when Satan burns out after millennia of running the bureaucracy in Hell.

If you are planning to nominate for the Hugo Awards, Grady is in his second year of eligibility for the John W. Campbell Award for best new science fiction or fantasy writer. You can view his  Campbell profile at http://www.writertopia.com/profiles/GradyHendrix.

I really goofed by sending a generic interview to Grady because he is not one to toot his own horn. He dutifully answered my questions about Satan Loves You and said almost nothing about his career as a freelance writer or his two forthcoming books with major publishers. I have added a little information on those books; within the interview, I’ve bracketed my insertions.

Welcome to my blog, Grady! I’m glad to have you visit. Why did you choose to self-publish Satan Loves You? 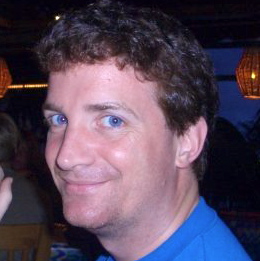 Reasons of personal sanity, to be honest. I have a couple of projects coming out later this year—a YA fantasy novel I wrote with a friend [The White Glove War: A Magnolia League Novel, with bestselling novelist Katie Crouch], a cookbook that I’m writing with my wife [Dirt Candy: A Cookbook: Flavor-Forward Food from the Upstart New York City Vegetarian Restaurant, with restauratrice Amanda Cohen]—and in the middle of all the deadlines, and the conferences, and the editorial meetings, and the collaborating, I wanted something that was my very own precious, that I could be in control of from start to finish.

What do you think are the advantages and disadvantages of self-publication?

As far as I can tell, there are no disadvantages to self-publishing. If you want to make a lot of money, I can see that there might be drawbacks, but if you just want to write books, I don’t see a downside. I don’t have a marketing department selling my book for me, but then again a lot of writers with publishing deals don’t have that either. So rather than spending my time navigating the interpersonal and business relationships of having a book at a major publisher, I spend my time hawking Satan Loves You directly to readers. It’s six of one, half-dozen of the other.

Why did you choose such a plain cover design? Would you let me design you a new cover? I wanted something that was simple and that stood out when you looked at it in the context of a Kindle or an iPad, something that used a lot of negative space and was iconic. What I’ve discovered is that people want a cover that looks more “booky.” Right now, I’m getting ready to do a print-on-demand version of Satan Loves You and a few other pushes in March, and a new cover is on my to-do list.

Why are you drawn to write about topics that are potentially offensive or controversial?

It’s not the fact that they’re potentially offensive or controversial that draws me to them, but I try not to second guess my interests. It’s hard enough to find a story worth telling without questioning whether it’s going to scare the horses or not. John Waters once said that good taste was the enemy of art. I’m not making art, but I think good taste is kind of a drag anyways.

What was your favorite part of writing Satan Loves You?

Having finished writing it.

I read anything that moves and my favorites change from month to month. Right now I’m really in love with Skippy Dies by Paul Murray, which is about a dead kid at a boarding school; John Dies at the End by David Wong, about an extradimensional drug addiction; and Rotters by Daniel Kraus, about bettering bonding through grave robbing.

Charles Dickens. I haven’t even read that many of his books, but the man was a workaholic. He never quit. Every day I wake up and I say, “WWCDD?” and then I take a long walk through the slums, have an affair on my wife, father a lot of children, edit a magazine, and go on a reading tour of America and die.

Going to Clarion in 2009 was the second-best thing I’ve ever done as a human being and there’s nothing I send out that doesn’t have the fingerprints of my fellow Clarionites all over it. I am totally and completely dependent on their editing skills. I trust their opinions in the same absolute way that I trust my doctor’s.

Right now I’m obsessed with where technology comes from. I feel as if a lot of speculative fiction is focused on consuming technology but not on making it. People write about spaceships and dirigibles, but were those built in a union shop? Did the people who crafted those Steampunk goggles make a living wage? Did that beautiful capital city require slaves to build it?

I don’t have a day job, and my wife owns a restaur- ant, so I’m basically on my own in the house from 9 am until 1 am, five days a week. It’s either write, or engage in endless self-loathing for not writing.

Get to the end. Even if it sucks, you have to limp over the finish line. Rewrites will make everything better.

Nice people who read Satan Loves You and feel as if it’s a personal cause they need to advance. And I found them by cold emailing pretty much every single blog I could find and asking if they’d like a free copy.

Right now I’m working on a story called “Only Space Jesus Can Save Us Now,” and it’s either going to be a short novella or a long short story. It’s at 38,000 words and I have to see whether I can cut it down to 12,000. This is a very painful process and it makes my brain bleed. [The White Glove War: A Magnolia League Novel and Dirt Candy: A Cookbook: Flavor-Forward Food from the Upstart New York City Vegetarian Restaurant are expected to be published in 2012.]

You can learn more about Grady Hendrix and his book Satan Loves You by visiting his blog-cum-Website at http://www.gradyhendrix.com. Satan Loves You is available online at Amazon.com and Barnes & Noble.

The White Glove War and Dirt Candy: A Cookbook are available for preorder at Amazon.com here and here, respectively.

SATAN LOVES YOU is indeed a good read. I read it aloud to my (adult) family, and it sparked a lot of laughter and discussion of the tropes the story toys with. Definitely a keeper.

ROZ M, did you read it to your mother and aunt? I can picture them, as preachers' kids, really cracking up over it.

CHARLES, glad you enjoyed the interview.