Ten signs that you’re in a bad critique group


I had planned to blog today about the world’s first work of fantasy, but I didn’t quite finish reading it. (Oops.) Come back next week to find out what fantasy literature of 4,000 years ago was like.

Here, instead, is a partial list of criteria for determining whether you should consider leaving your critique group.

1. A dunce cap is awarded at the end of the critique session to the person whose chapter was that week’s worst.

2. Critiques sometimes start with “Even an idiot should know that . . . .”

3. Shouting is not only permitted but encouraged.

4. When the other critique group members finally find something to agree on, it’s that your work is beyond redemption and you’ll never be published.

5. Critique-ers believe they can help you most by rewriting your sentences in their own style.

6. Your critique group contains at least one of the following people:
7. The Christmas, Hanukah, Kwanza, or Winter Solstice party is cancelled because no one is speaking to each other.

8. Your mother belongs to your group and scolds anyone who points out a problem in your work.

9. The four-hour critique session consists of three-and-a-half hours of snacking and socializing and one-half hour of critiquing.

10. When you point out a subject-verb disagreement, someone asks, “What’s a verb?”

For some helpful hints on creating a good critique group, see this set of posts at the Writers' Group blog: http://writersgroupblog.blogspot.com/search/label/How%20we%20conduct%20our%20meetings
Posted by Shauna Roberts at 2:32 PM 12 comments:


Two people, Farrah Rochon and Sphinx Ink, have tagged me with the "eight random things" meme virus that's going around. I didn't post after the first tag, thinking no one would be interested in facts about me, and besides, it's not related to writing. After the second tag and after seeing my writing friends post their lists, I figured I would go along with the crowd.

I have to post these rules before I give you my facts.
•Each player starts with eight random facts/habits about themselves.
•People who are tagged need to write their own blog about their eight things and post these rules.
•At the end of your blog, you need to choose eight people to get tagged and list their names.
•Don’t forget to leave them a comment telling them they’re tagged, and to read your blog.

And now [cue drum roll], onto the facts.

1. New Orleans is the only place I've ever lived where I felt I fit in. 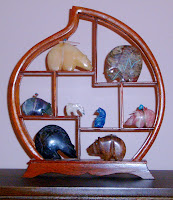 2. I collect Zuni fetishes, mostly bears. For those who don't know what they are, they're carvings, usually of animals, usually small, usually made from stone, usually highly polished, and usually having symbolic meaning in the Zuni (Ashiwi) culture. At left, you can see eight of my bears on display.

3. Most of the many scars on my arms came from chimpanzee bites. I've also been bitten by a caiman, but it was only a six-incher, so I have no scar to show for it.

4. Like Agatha Christie, I have to eat when I write. Unlike her, unfortunately, my oral fixation of choice is not low-cal, low-fat apples, but chocolate. Lots of it.

5. I love earrings. I have dozens of pairs and wear some every day.

6. When I was little, I wanted to grow up to be either a professional baseball player or a missionary. The latter choice was not due to any great desire to save souls, but rather because I didn't know of any other profession that would let me travel around and see the world. 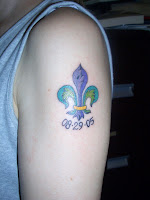 7. I didn't get my first tattoo until I was almost 50. (For readers who are not from New Orleans, 08-29-05 was the date that the federal flood walls broke in New Orleans after Hurricane Katrina. Purple, green, and gold are the traditional colors of New Orleans' Mardi Gras, and they symbolize, respectively, justice, faith, and power.)

8. I worked on two archaeological digs during summer vacations from college. Wearing earrings, of course.

Now I'm going to break the rules. I don't pass on chain letters (well, I sometimes make an exception if they involve recipes), and I'm not going to infect anyone with this virus meme.

If my weekly posts suddenly stop, emails to me bounce back, and a black cloud hangs ominously over a certain blue Tudor house in Uptown, you'll know that something Very, Very Bad happens to people who don't pass the "eight random things" meme on.
Posted by Shauna Roberts at 12:04 PM 11 comments:


The main writing organization in New Orleans is SOLA, the Southern Louisiana chapter of the Romance Writers of America (RWA). SOLA’s members include not only romance writers but also those who write science fiction, fantasy, mystery, suspense, and nonfiction. Each July, some SOLA members trek to RWA’s national conference, a several-day event stuffed full of workshops, book signings, book give-aways, and parties. One comes home from “National” bursting with inspiration and the urge to try out all the new techniques and ideas one learned there.

This year, only one of the five members of my critique group can attend the RWA conference. The rest of us are, of course, disappointed to miss it. So this past weekend, all five of us took time off from work to have our own workshop and retreat. From 8:30 am to 4:00 pm, Friday through Monday, we sat around my dining room table and worked our butts off.

Our schedule allotted each person 4½ hours for whatever project she wanted to work on with the group. Each day had time carved out for lunch and an afternoon snack, and we ended the retreat with a 1½-hour discussion.

The retreat was a far greater success than any of us had expected—so successful, in fact, that we used our wrap-up discussion to start planning a retreat for next year. We consumed huge amounts of snacks and laughed our heads off and celebrated Farrah’s second book contract and, most importantly, delved deeply into the writing process. We learned a lot, not only from our own 4½ hours but also from everyone else’s projects.

So what did we do? We all spent some time brainstorming portions of books or stories; one person plotted out two complete novels. We discussed various ways of keeping track of the chronology of a book’s events. One person has a novel almost ready to query, and we spent her session working on a hook and a minisynopsis for her query letter.

I decided to spend my session on learning how to put more emotional punch into my scenes after hearing one too many times in critique group, “But what are they feeling?” As regular blog readers may have noticed, I’m not a mushy, gushy person. My book characters tend to keep a stiff upper lip through all their trials and tribulations. No more. Now they will wring tears from readers’ eyes with their griefs and joys.

The retreat was an intense experience. We’ll be tired for days and trying to lose the weight we gained for even longer. But it was worth every minute. I leapt to a new level in my writing. Not bad for four days’ work.

Ruminations on rumspringa, or “Duh!”


One of the speculative fiction writer’s hardest tasks is to free herself of cultural blinders that lead her to view the future, the past, and potential alien cultures through the lens of modern American values.

No one wants to be like the Hanna-Barbera team that produced The Jetsons. The women’s movement was brewing, the civil rights movement was stewing, yet in the imagined future lived by the Jetson family, subservient women stayed home (even though machines handled the housework), and only white people played a role in society. It was not a look forward at all, but rather a nostalgic projection of 1950s values and behaviors that were already becoming obsolete.

Writers still fight with this problem—and lose. Novels set in the Middle Ages sometimes are bewilderingly free of the everyday rituals and reminders of religion that dominated those times. Novels set in the far future or in alien galaxies too often graft, Frankenstein-like, contemporary American mores and social patterns onto societies whose history could not have produced them.

I try to keep my anthropological training in mind when writing speculative fiction. Other human societies, past and present, offer a cornucopia of philosophies, religious practices, taboos, diet beliefs, codes of honor, styles of dress, divisions of labor, and sex roles for the writer to feast on when birthing a world.

I realized recently, though, that contemporary America is not completely sterile as an inspiration for worldbuilding. My eye-opener was Rumspringa: To Be Or Not To Be Amish by nonfiction writer Tom Shachtman. The book focuses on the custom of rumspringa (“running around”) practiced by the Old Order Amish, the strictest of the anabaptist sects in the United States.

After Old Order Amish teens leave school at 14, they are allowed some years of freedom in the world before they must decide whether to be baptized and join the Amish church and live under all its rules. The Old Order Amish believe a person cannot make this decision without knowing what they are giving up. Rumspringa is a time of exploration during which teens may take jobs in the outside world, smoke, drink, drive, dress “English,” wear make-up, own cars and CD players and cell phones, and spend time with people of the opposite sex without adult chaperones.

As you might guess, when these innocents are set free from the tight restrictions of Amish life into the alien world of American teenagerhood, many tumble headfirst into a wild life of sex, drugs, and rock and roll. The book chronicles the adventures and confusion of several teens as they struggle to choose the course of the rest of their lives, sometimes while burdened by alcoholism or drug addictions or love for someone non-Amish.

Over the course of the book, one learns quite a bit about the Amish perspective on life—what is moral, what a desirable life is, how decisions should be made, how society should be ordered, the value of living apart from the wider world—as well as what can befall a stranger in a strange land. What struck me hard was that a society that had strict rules covering every aspect of life down to the number of straight pins one could use to keep one's blouse closed allowed teens a brief respite from all of these rules. It's an idea I've never seen explored in fiction, even though many fantasy books are coming-of-age stories.

I found Rumspringa a fascinating book that gave me an inside look at a way of life in some ways opposite the one I live in New Orleans. Clearly, I don’t need to look far away in distance or time to find intriguing ideas for stories; America has plenty of groups with distinct and interesting subcultures—something an anthropologist should have known. Duh!
Posted by Shauna Roberts at 2:29 PM 7 comments: