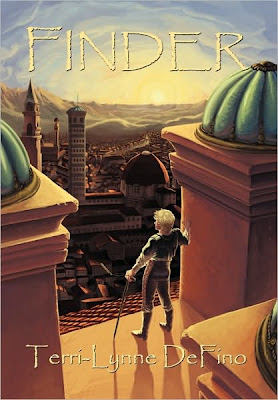 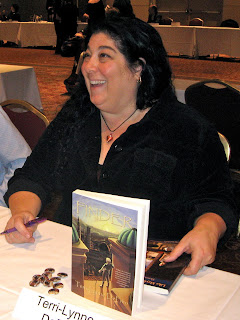 
Random thoughts and information about the 2010 World Fantasy Con; summaries of sessions to come later.

Biggest inspiration to write more: I found out that my niece, who is majoring in genetics and has a double minor in psychology and English, still finds time to write every day and is doing NaNoWriMo this month.

Biggest awkward moment: Shortly after I and a friend had interrupted Guy Gavriel Kay's dinner to tell him how much we loved his books, I found myself in a "what do I do or say now?" moment, standing by the elevators waiting for an elevator with him. What is the proper follow-up behavior to gushing?

Best news for writers: Although many big publishers are in crash mode, I talked to several spec fic micropublishers who have survived and are expanding. They seem to be looking for a somewhat wider variety of books than the mainstream publishers, too.

Total number of free books: I already took a heavy box of books to the post office, so I can't count them yet, but I would guess about three dozen.

Free book I most want to read after The Way of Kings: Hell Can Wait by Theodore Judson. This book attracted my attention with the Roman soldier cover and kept it with its back-cover copy about a Roman soldier who finds himself 1800 years in the future trying to survive in modern-day America. This is a publication of mmicropress Edge.

Best career decision ever: Being a Clarion grad gave me credibility and instant rapport with all the Clarion and Clarion West grads I met.

Most discouraging statistic: A slush reader for Clarkesworld magazine said that its six slush readers each get 25 to 30 manuscripts per day to review. The magazine publishes only 12 short stories a year.

Best "I'm really a writer" moment: LOCUS magazine took several pictures of me! (And of many other people too, I have to admit.)

Worst feature of con hotel: One thousand writers on the Internet simultaneously overwhelmed the system and made it as slow as I remember 300 bps modems being.

Worst "I wish I'd known that earlier" moment: The con suite provided free breakfast, lunch, dinner, and snacks. I didn't find out until Saturday night.