The Universe really wanted us go to Château Labottière today and see an unusual piece of art.

We woke up today never having heard of the house (now the Institut Culturel Berhard Magrez). But at a shop, the owner handed us a flyer for the house, saying her son gave tours there. We looked at the map. It was easy to get to and near a large city park, so off we went.

Then for some reason we didn't understand, the ticket desk let us in for free instead of the usual 7 euros each.

We toured the gardens and looked at the art downstairs. We were about to leave when the guard said we were allowed to go upstairs, despite the sign saying we couldn't.

Upstairs, we found this delightful piece: "Macedonia," made by Portuguese artist Joana Vasconcelos in 2006. It consists of a ceramic German shepherd encased within crocheted cotton. 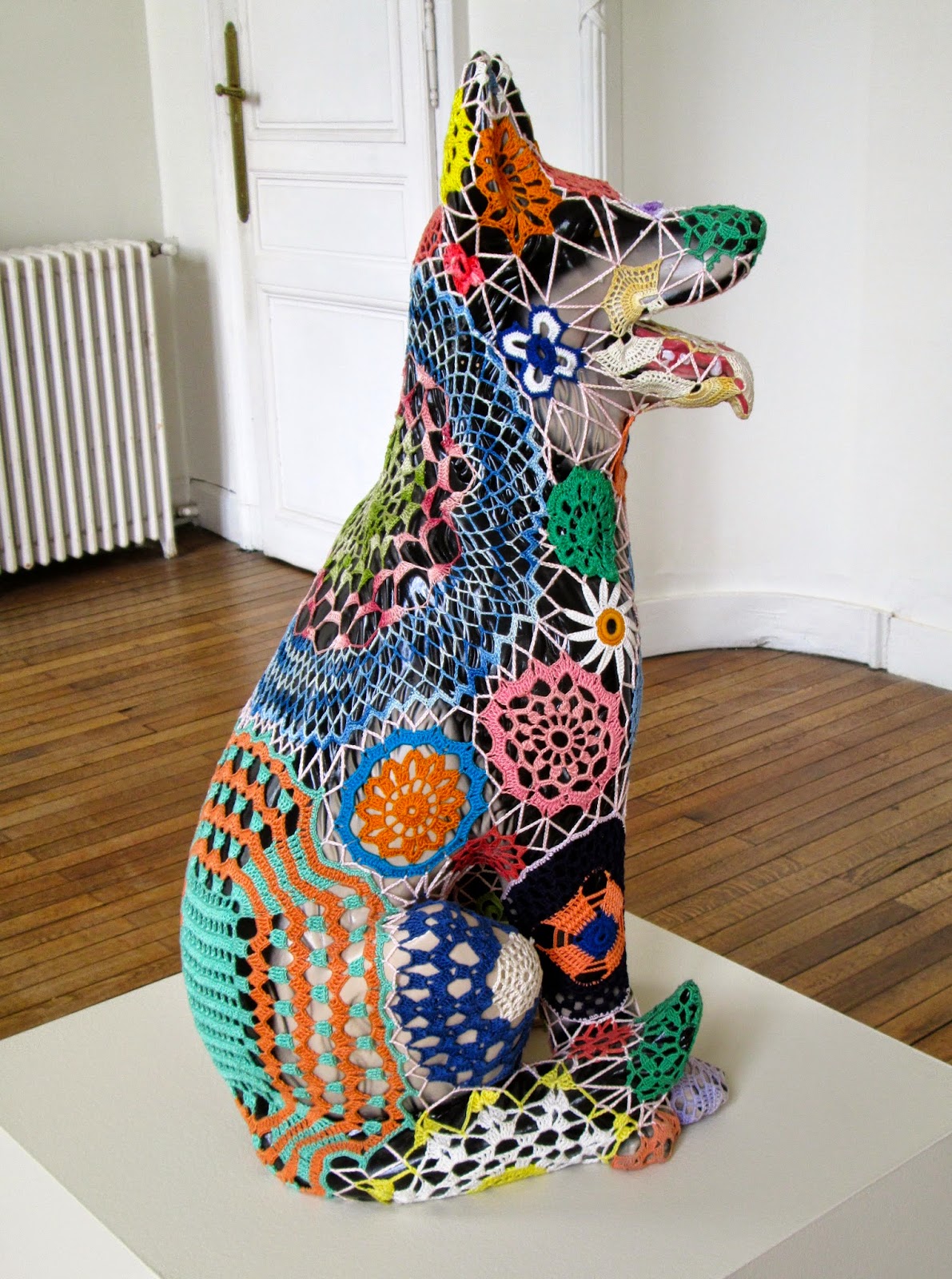 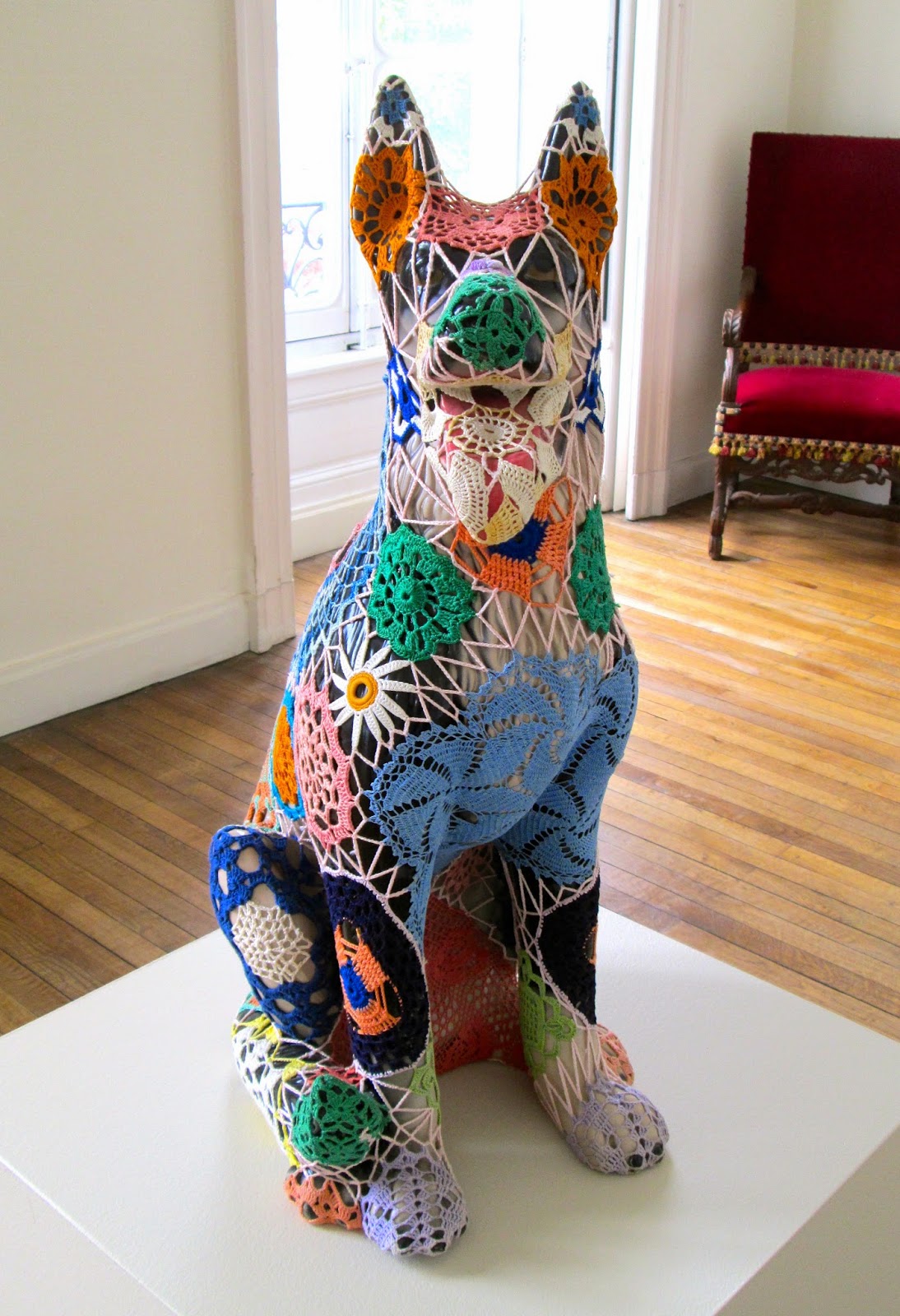 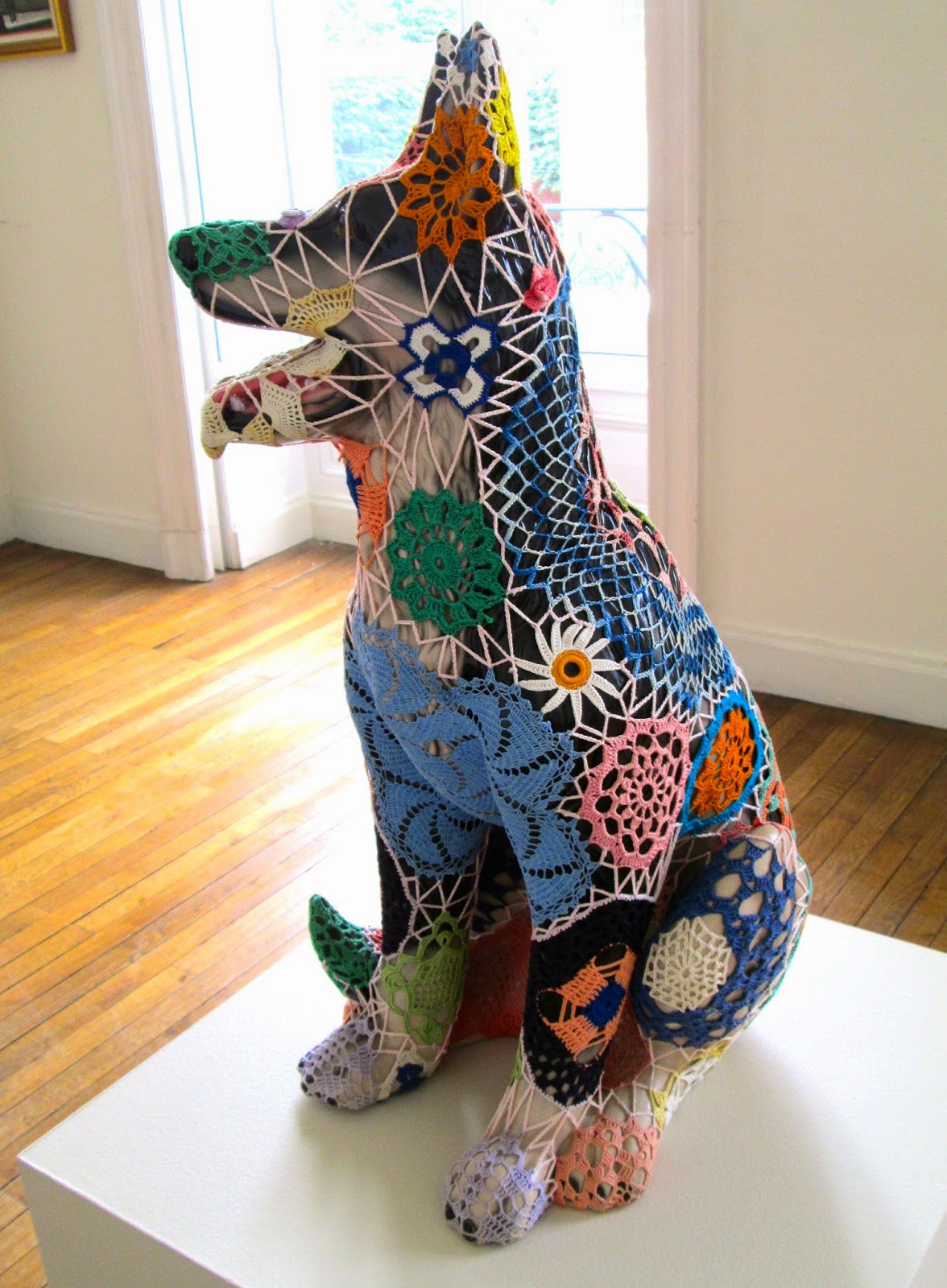 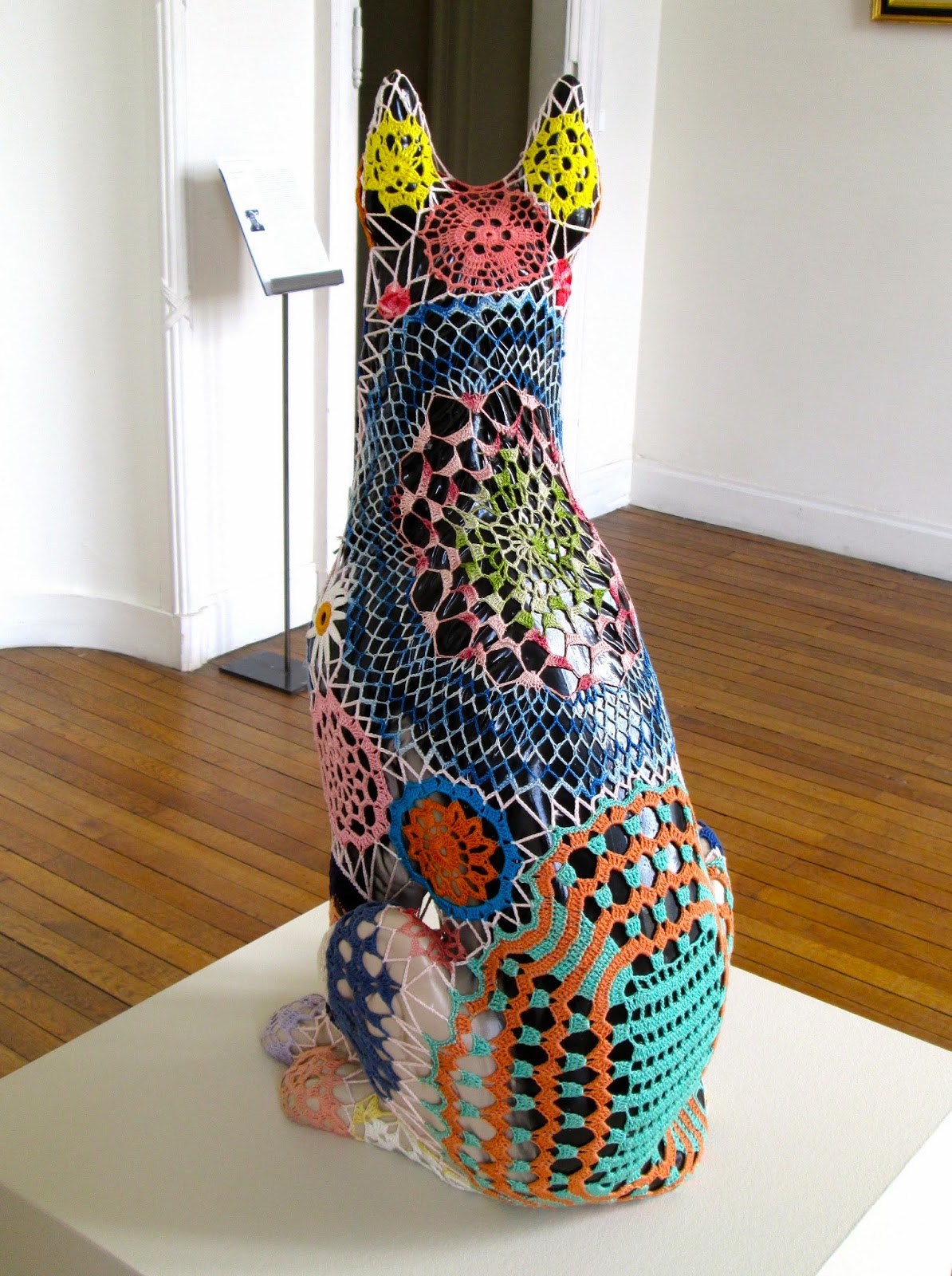 According to the rather awkward English commentary, "To Portuguese women, knitting is a symbol of femininity. By clothing her ceramic sculptures....Vasconcelos is articulating her work on the opposition between animality and feminine softness."

Uh, okay. I liked it because the crochet was beautiful, and shaping it to fit the animal took a lot of skill.


As were were leaving, we picked up a brochure on the colorful history of Château Labottière. It was built before the Revolution for the brothers Antoine and Jacques Labottière, Bordelais printers and publishers who wanted a vineyard in the countryside. The brothers were ruined by the Revolution and had to sell the house. It next became a "pleasure house" called Tivoli. Later occupants include the mayor of Bordeaux, the Jesuits, a woman and her live-in lover, and the French government. The building now houses part of the art collection of wine magnate and art lover Bernard Magrez.

A brief biography sheet of Magrez in one of the rooms said that he was trained as a tree trimmer. (I suppose it's always good to have a second career to fall back on.) So I'll end with a picture of the garden taken from the second floor, showing some of the trees and intricate boxwood gardens: 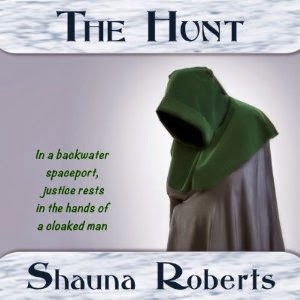 Amazon.com has discounted the audiobook version of my science fiction novelette "The Hunt" by 70%. It usually is $6.95, but now it is $1.99. I don't know how long it will be on sale. Here is the link: http://smile.amazon.com/The-Hunt/dp/B00JAK5A1K.

I'm guestblogging today at Anne E. Johnson's blog, "Jester Harley's Manuscript Page." I talk about why I do so much research for my novels. You can find the post at http://anneejohnson.blogspot.fr/2014/05/shauna-roberts-on-mesopotamia-and-doing.html. 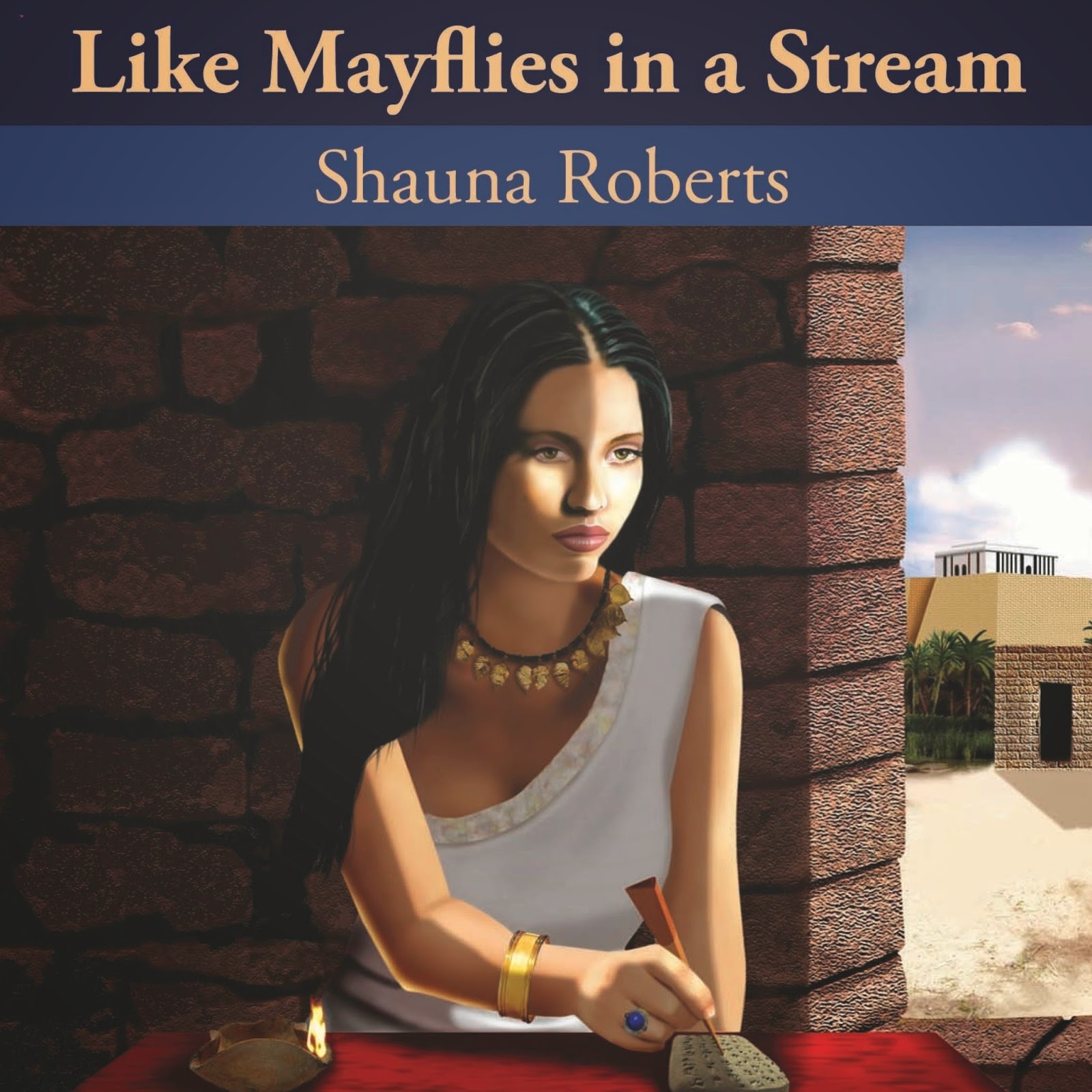 At left is a preview of the audiobook cover for Like Mayflies in a Stream. The audiobook is in production and will be released in early summer.

By the way, Hadley Rille Books is discontinuing its hardcovers. If you were thinking of getting the hardcover version of Mayflies or any other HRB book, now is the time to order. When they run out, they're gone for goo.

Posted by Shauna Roberts at 9:00 AM No comments: