Eric Griffith’s first novel, Beta Test (Hadley Rille Books), debuted in December 2011. In this humorous apocalyptic story, geeks try to save Earth from being shut down.

If you are planning to nominate for the Nebula or Hugo Awards, Beta Test is eligible in the novel category. 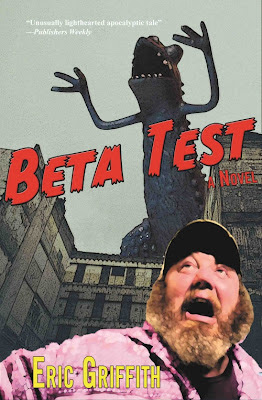 Welcome, Eric, to my blog today. I’m glad you could be here.

What was your favorite part of writing Beta Test?

The best part of writing this book was letting the funny flow. Other stuff I've written tended to be a little more serious or dramatic. While I'm never one to go entirely grim, Beta Test was planned as a comedy from the start, even if it was set against the backdrop of a Rapture-like event and the eventual end of the universe. Because that's how I roll.

Most of my reading for fun tends to be crime thrillers. I absolutely am addicted to every new book by Michael Connelly, Lee Child, Karin Slaughter, and John Sandford. I desperately miss the late Ed McBain's yearly 87th Precinct novel. I tried to write a couple of crime novels like theirs, however, and had to give it up. Keeping track of things in the "real world" is too hard. It's more fun to write scifi/fantasy in which I set the rules. "Laws of physics" be damned.

The work of Lee, Kirby, Ditko, Stern, Byrne, Claremont, Wolfman, Perez, and untold thousands of others in comics set the stage for me to love tales of adventure. Writers like Neil Gaiman, Steve Gould, Christopher Moore, Nick Hornby, they all make it look so easy, so when I tried to sit and evoke what they do, I found out just how hard it is—and how great they are.

But going back, Kurt Vonnegut first showed me that a scifi novel about a guy unstuck in time could have so much to say about humanity, even if the author said it wasn't really scifi.

Nothing has driven me more. At the 2007 class of the Viable Paradise scifi-fantasy writing workshop that's run by editors and writers from TOR, I was introduced to a group that changed my life. My "tribe," if you will. We've become each other's critiquers, cheerleaders, backers, travel companions, and dear friends. If anyone is serious about writing and doesn't have the funds or time to try something like Odyssey or Clarion, Viable Paradise is indeed a paradise. Spend a week on Martha's Vineyard, learn a lot, and meet the writers who will help change your life. Without them, I would not be where I am today. Hell, Beta Test was the novel I had critiqued there, so it's doubly true!

Why did you choose a small press to publish your books, and what do you think the advantages and disadvantages are? 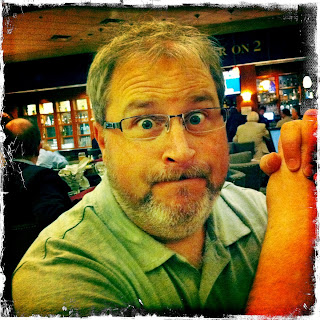 Well, I'd certainly have been happy to be published by a giant publisher... I think. My experience working with Hadley Rille Books has been nothing short of amazing, however. I'm not treated like some kind of content producer who should thereafter keep his mouth shut and just pray. With HRB, I've got a direct line to the publisher, whom I consider a friend. He's genuinely a nice guy who's not out to do anything short of put out books he likes and that others will like. Period.

Even the experience of the cover, which I thought would be one of those things where I had to keep my mouth shut, turned out to be such a back-and-forth that we went with my ideas for it (executed, I should add, by a talented group of my friends.) I think it's got the perfect kind of 1950s B-movie horror-comedy vibe that Beta Test needs. And no, that's not me on the cover! My ego only extends to my name being on it.

I've noticed that all of my protagonists come from broken homes of some sort—either one parent is missing or dead, or there's been a divorce, or there was abuse. Which is interesting (to me, at least), because my parents are still together after 43 years and are my biggest supporters. I dedicated Beta Test to them. Perhaps I don't really understand how other families deal with such things, and I tackle it in my writing... or it's just dramatic background, given the parents of my protagonists don't really play too much of a part.

The exception might be Beta Test, because the lead character, Sam, sets out to find out what happens to all the people missing from a mass-vanishing on Earth. One of those vanished is his mother.

I'm not sure I'd call it a regimen. I spend all day long at my desk at home working for my day job (I'm a features editor for PCMag.com). Then, before my girlfriend gets home from work late, I try to cram in two or three hours of writing time. Which should be plenty, to be honest, but I can't do it at home because 1) I have a visceral need to get the hell OUT and 2) I can't do writing for me at the same desk I use for work. I have a mental block about it.

I tend to pack up my tiny netbook laptop and go to a café, typically Barnes & Noble, but lately I'm branching out to the local shops that have free Wi-Fi. Of course I need that so I can crank up a Pandora station full of movie soundtracks—the best music for writing. After copious checks of Facebook, Twitter, and Google Reader... then I open up a document. And sometimes, I do all that and then realize I have to head home.

Would I recommend this to aspiring authors? Only the talented ones that I don't want to compete with.

Did your day job writing about technology inform your writing of Beta Test?

The job inspired the title and the idea many, many years ago (you can read about the gestation of that here: http://whatever.scalzi.com/2011/12/16/the-big-idea-eric-griffith/). Ultimately, Beta Test is more fantasy than any kind of hard scifi tale. The most realistic thing in the book is probably just how much the main characters have to deal with traffic and waiting at airports. The talking dinosaurs, not so much.

The best advice of all is just finish it. Don't overthink it; don't edit as you go. There's a reason National NovelWriter's Month (NaNoWriMo) is your friend—it's all about teaching a writer to finish. If it's any good, it's worth going back to, and then you can fix anything wrong with the first draft. But the first one is the absolute hardest. Just FINISH it already.

Local bookstores have been great to me—and given me a chance to meet the people behind the scenes. (The big national chain? Well, not so much, but local authors who aren't big names aren't exactly what they're all about.)

And never, ever neglect the online aspect. The opportunity to do blog interviews like this and mention that I have ebooks versions of the book, priced CHEAP, can't be stressed enough. Obscurity is the ultimate enemy of a new author, and anything that gets the book out there is worth trying.

Good question! No one's bought any of my other books yet. However, considering the successes some people see with self-publishing, there's no reason not to seriously considering putting some work I thought was consigned only to a drawer out there for people to see in the future. I still believe in it, and who knows, it could be a hit. I know my mom will buy a copy for her Kindle.

Thank you, Eric, and best wishes with your writing!

You can learn more about Eric Griffith and Beta Test by visiting his Website at http://egriffith.info  and his blog at http://www.squishedfrog.com. Also please follow him at www.twitter.com/egriffith. His book is available online at Amazon.com (and for Kindle), Barnes & Noble (for the Nook), Powells, BetterWorldBooks, direct from Hadley Rille Books, and locally at Buffalo Street Books in Ithaca, NY, and Downtown Books and Coffee in Auburn, NY.

Posted by Shauna Roberts at 3:30 AM

It is the age of the geek. Good to see them getting into the world saving act!

I agree, CHARLES. I wonder why we don't see more sf books featuring geeks, when so many of the fans are.