I’m delighted to welcome today Nicole M. Taylor, who was one of my classmates at the Clarion Science Fiction and Fantasy Writers’ Workshop and who has been publishing interesting short stories since.


If you are planning to nominate for the Hugo Awards, Nicole is in her first year of eligibility for the John W. Campbell Award for best new science fiction or fantasy writer. You can view her Campbell profile at http://www.writertopia.com/profiles/NicoleMTaylor.

My apologies to Nicole and my readers that my hectic schedule forced me to send her a generic interview instead of the usual customized interview. If my questions and her answers seem a little odd, that’s why.


What is your favorite part of writing? 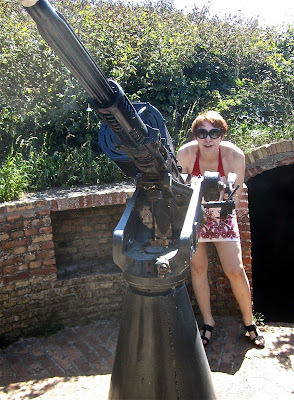 My favorite part is something that I’ve experienced with nearly everything I’ve done, from short stories to this interview to novels I’ve started. It’s that feeling of locking into place when you realize what a story needs, where a scene goes, what a character’s deal is. It’s as if somebody threw open the windows, and it always thrills me. No matter how rigorously I outline something, there are always places where I get stuck or insights I don’t have until later, and it’s sort of like playing detective in your own brain.

Weirdly enough, I suppose, I really don’t read in the genre I write. Which I do not think is recommended. I believe it is actually anti-recommended. I overwhelmingly read nonfiction; after that, probably horror and sci-fi. I’m also big on fables and fairy tales.

Ray Bradbury, Margaret Atwood, L.M. Montgomery. They all came along at different critical points in my life and changed not just who I was, but who I was even trying to be.

I think the single best thing about making friends with other writers is that it really demystifies the process. You see these people that you admire so much, and you realize that they’re just people, that they struggle with many of the same things that you do. And, for me, seeing that everyone else had similar neuroses and stumbling blocks opened up the walls of possibility. Other people overcame these things to be successful; why not give it a try?


I tend to notice these things only later, having amassed a body of work and realizing that it features an awful lot of X or Y, but, in general, I often write about women. I often write about poor, rural women, in particular. I write a lot about nasty magic that requires bodily fluids and, usually, some manner of killing. For a while, I was writing about people with scars a lot. There are a lot of mixed-heritage (both in the standard human way and sometimes with reptoid aliens. Not kidding) people in my recent stories and a lot of people on the autism spectrum. I’m not sure exactly why I’m really interested in that right now, but it’s something I’m clearly working through in my writing subroutines.


Yikes! Regimen...that’s a...strong word. In an ideal world, I’d write an hour a day in the morning either immediately after I woke up or shortly after. In practice, I only manage this two or three days a week. I do try to get at least some writing done every day. Right now, I’m working on a novel, and it’s been a while since I’ve worked on just one project for such a long time, so I’m trying to train myself not to skip off and do other things. Other than that, I tend to chew a lot of gum (I mean like a pack an hour) and drink a lot of water and sometimes sort of get up and pace around.

I don’t know that I’d recommend any of that.

The biggest thing I’d suggest is just to make writing important to yourself. If you don’t see it as real and valuable as the other stuff in your life, then the other stuff is always going to take precedence.

I presume this question is more for people who have...er...finished their first novels? I’m about midway through the second draft of mine and my goal is to get it in agent-subbing shape by the summer. I have far more to learn than to teach when it comes to this, but here’s what I’ve gleaned:
1. Scrivener is pretty cool; try it out.
2. For me, a strong, detailed outline is essential.
3. Don’t give it to people until you know what it’s about, where it’s going, what the shape is. Wait until you’ve got a thing to fix before asking others to fix your nebulous not-a-thing, because that’ll cloud your vision, I think.

I really haven’t done a whole lot of promotion for any of my stories and they’ve all been kind of low-key, press wise. “A Spoonful of Salt” got the most attention, but that was probably due to the more high-profile market it appeared in than anything I personally did.

When will your next work come out, and what will it be about?

I have a few stories coming out soon.

“The Undertaker’s Son” will be in an upcoming issue of Shimmer Magazine. It’s an excerpt from the novel I’m working on, featuring a boy who grows up in a funeral home among the ghosts. Literally.

“The Mad Scientist’s Beautiful Daughter,” a Clarion story, actually, will be in the next issue of Andromeda Spaceways Inflight Magazine. It’s about a quiet and orderly girl, her beloved father, heroes, villains, and cyborgs.

I’m also really excited to announce that Beneath Ceaseless Skies has accepted another of my stories, a kind of novella called “Hold a Candle to the Devil.” It’s also taken from The Witches Knot and it’s about a struggling young Madam in the mid-1800s attempting to deal with a violent John. With magic. Mean magic.

The novel I’m working on, The Witches Knot, is about witches, but more broadly, it’s about how different people might approach magic, how they might shape it as it shapes them. It’s a family saga with kitten murder and circuses and unwed teenage mothers.

Thanks so much, Nicole, for letting us see underneath your sweet, Midwestern-girl-next-door exterior to the fiendish personality who delights in writing about human-reptiloid sex and kitten murder. (Now I kind of wish I had sent you the usual customized interview.) Congratulations on your many pending stories and best wishes for finding a great home for The Witches Knot.

Interesting interview. I always read in the genre I write. I'm not sure I could do it otherwise.

CHARLES, I don't think I could write in a genre I didn't read regularly. In fact, when I decided to buckle down as a fiction writer, I thought about the genres I read and chose sf/f as the genre I'd likely have the easiest time writing.

Yet I've heard that many musicians listen to completely different music than they play—someone in a metal band, for instance, may listen to classical music at home. So perhaps it's not so uncommon.

Also, note that Nicole's fantasy writing contains some elements from the horror she enjoys reading. So she is not so far away.