Guest post: Can a working-class hero work in romance?

Today I welcome journalist and fiction writer Jessica Cale, who bucked the trend for titled heroes in romance novels and explains the appeal of her hero, Mark Virtue.

Falling in Love With a Working-Class Hero 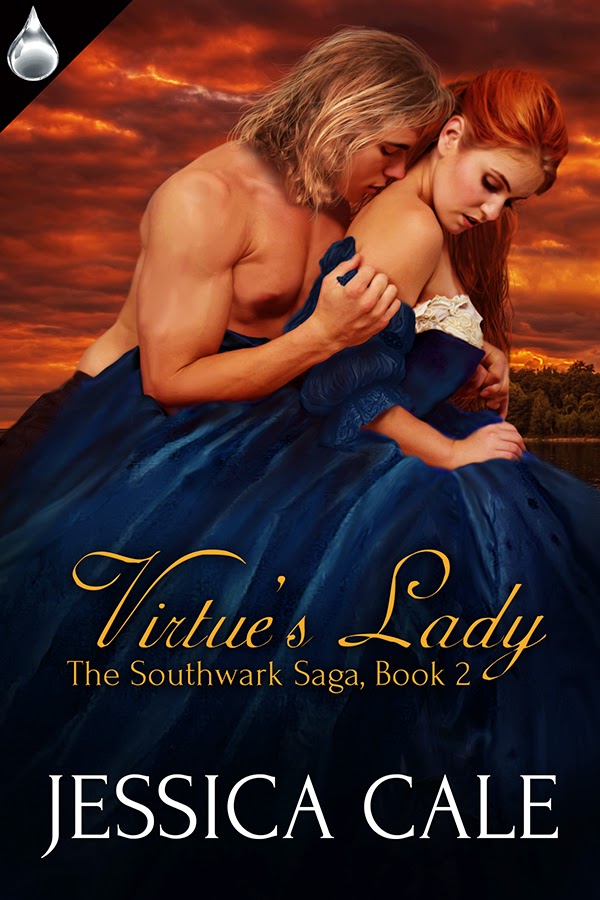 With so many dukes and earls populating the pages of historical romantic fiction, you might wonder why I chose to pull my hero from the working class. Because dukes have the money, the education, and the endless supply of bespoke suits, working-class men often get overlooked, and that is a dreadful shame.

Why? Money and position aren’t everything. Lord knows overcoming obstacles is harder when your resources are limited, but your wits get sharper when you’re forced to live by them. Besides, there’s nothing sexy about a man who can’t feed or dress himself without the help of servants.

Helpless is not a word commonly used to describe my character Mark Virtue.

There’s a lot to love about Mark. After spending the uncertain years after the Great Fire of London robbing coaches as a highwayman, he’s decided it’s time to settle down and take his place as Southwark’s Master Carpenter in truth instead of using the business as a front for his less reputable activities. Two stints in Newgate are enough for any man, after all, and Mark doesn’t fancy going back. Not as long as the warden fancies him as much as she does…

Mark’s life hasn’t been easy. He may have grown up in a posh house in St. James, but that doesn’t mean he’s anything other than thoroughly common. His father may have been a war hero, but he ran a stable first, and it was only through his mother’s second marriage that he was able to get his apprenticeship at all. Years of back-breaking labor sculpted that body of his as he built houses—and coffins—for his impoverished neighbors, often at his own expense. He’s been poor and he’s gone hungry, but Mark takes his duty to his community very seriously because he knows that although they may all be in the gutter, they’re in it together.

That’s not to say he’d ever complain. He appreciates what he has and he loves the life he leads. He’s smart, he’s resourceful, and he’s down to earth. He’s an independent, self-made man, and he’s not looking for a housekeeper or a trophy, he just wants a girl.

One girl in particular.

Mark has always been popular with girls; just ask the Henshawe sisters down at The Rose & Crown. Meg’s decided he’s hers now, but Mark only has eyes for Jane. Jane the actress. Jane the seamstress. Lady Jane Ramsey, the bloody bane of his existence, whose wicked smile and steel-gray eyes haunt his dreams. As the daughter of an earl and an heiress besides, they were never meant to inhabit the same world. Their only night together? A fluke. Jane could no more live a day in Southwark than he could fit in at Court, and he wouldn’t want her to.

You can meet Mark in Tyburn and read his story in Virtue’s Lady, out now.

Jessica Cale is a historical romance author and journalist based in North Carolina. Originally from Minnesota, she lived in Wales for several years, where she earned a B.A. in history and an M.F.A. in creative writing while climbing castles and photographing mines for history magazines. She kidnapped (“married”) her very own British prince (close enough) and is enjoying her happily ever after with him in a place where no one understands his accent.

You can visit her at http://www.authorjessicacale.com. Her first novel, Tyburn, won the Gayle Wilson Award of Excellence in the Historical Category for 2015. You can find both Tyburn and Virtue’s Lady here.

CHARLES, I agree! What a wonderful blue.

JESSICA, thanks again for your guest post. After thinking about your post, I realized that the working-class traits that make your historical hero a hero are the same traits that appeal to women in contemporary romances about cowboys, police, firemen, military men, and men in other such jobs. I wonder why the difference? The much lower standard of living of working-class people in the past? Do you have an opinion?

You're absolutely right! So many of the traits are those that are seen as ideal today (in contemporary romance and real life), but I think people have a hard time imagining the lower classes in history, just because there's not so much written about them. Even in school, you get given this view of peasants or serfs as a single entity with a collective consciousness, and that's just bizarre to me. I think the preference for wealthy and titled heroes in historicals is mainly just an extension of the contemporary hero archetypes romances have been relying on for years -- the millionaire, the billionaire, the Prince, Sheikh, rich boss, etc -- that are more about wish-fulfillment. That's fine, and there's a place for that, but I don't want to see the poor or the marginalized left out of history OR romance.

The trouble is that they really have been. It's harder to research the lower classes, and it can be incredibly depressing, especially when you get into mortality rates. The standard of living was a lot lower, but in this series, I'm trying to show that that's not without its romance. What's more romantic than a man giving someone literally everything he has?

I would love to see more diverse heroes in historical romance. Just because you mainly read about the great and the wealthy in history books, doesn't mean the others weren't there. They had dreams, loves, and opinions of their own, so I think they should have their own adventures, too.