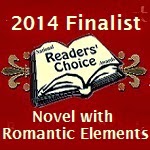 My most exciting news today is that my 2014 historical novel, Claimed by the Enemy, is a finalist in the National Readers' Choice Awards in the "Novel with Romantic Elements." I was happy to see that my friends Jennifer Apodaca and Debra Mullins were finalists in other categories.

Winners will be announced in July at the Romance Writers of America National Meeting, which unfortunately I won't be attending.

In other, sillier news, there are now only two degrees of separation between singer Beyoncé and me. She and her husband, Jay Z, bought the Garden District house in which my husband and I had an apartment this past fall when we were in New Orleans. Read more here: http://theadvocate.com/news/neworleans/neworleansnews/12345495-123/jay-z-and-beyoncé-buy. (Our apartment was one of the three mentioned at the end of the article.)

ADDED LATER: A friend sent me a link to an article with a gallery of four pictures. Our apartment isn't pictured, but the roof garden is, along with cool shots of the interior. See them at http://www.xxlmag.com/news/2015/05/jay-z-beyonces-new-orleans-mansion-former-church/.

Posted by Shauna Roberts at 3:13 PM

Email ThisBlogThis!Share to TwitterShare to FacebookShare to Pinterest
Labels: award, Beyonce, Claimed by the Enemy, NRCA

As an alumna of the ballet school that used to be in the Carters' new home, I'm desperately hoping they at least make few changes to the facade. So many memories attached to that building...

Cool about being a finalist. Good luck. Certainly a deserving book.

ROZ, the building could use application of several gallons of Killz and then fresh paint. And the cement or stone decorations would be prettier if the pollution were cleaned off. The inside has been rehabbed fabulously, but the outside looks tired.