Below is a slightly altered version of my post at NovelSpaces today. It raises an issue in self-publishing that has not been addressed much . . . or at least none of my friends have talked or blogged about it. The issue is how to design a good cover when one is self-publishing in both trade paperback and ebook formats.

Here is the NovelSpaces post with my ebook cover design added:


I met a writer at the recent ConQuesT science fiction convention in Kansas City who had sold about 180,000 self-published books in the past year. I mentioned that I planned to self-publish a novel this summer, and she encouraged me to produce both e-books and trade paperbacks.
I took a look through her CreateSpace-printed books and was surprised at the quality. (CreateSpace is Amazon's hardcopy self-publishing arm.) The coverstock, inside stock, and ink looked as good as those of books produced by New York. I decided I would self-publish my novel both electronically and as a trade paperback. 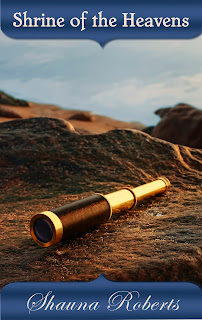 But what would I do about the cover? I had designed it for the Kindle, and so it:
It won't work as is on a 6x9 trade paperback. Sure, I can stretch the image here and squash it there so it looks nearly identical to the Kindle cover. That would allow me use the same promotional materials for both.
But do I really want to make only minor formatting changes? What is pleasing and catches the eye in an image half the size of my thumb and on the cover of a 6x9 paperback are quite different. A book cover pleasingly complex enough to get me to spend a minute or two looking at it in person is often a blurred mess when viewed in the carousel of my Kindle. (Which I know because covers look different enough in person vs. on my Kindle that I have bought several expensive books on Kindle and then later bought them in paperback or hardback, not recognizing them. Ouch!)
I worry that the Kindle cover may be too loud and too simple to work for a paper book. I worry that my name will look overlarge on the paper cover for a writer early in her career.

Another worry: I created the cover using Microsoft Word and some free programs. (I don't own Adobe Illustrator or any other fancy art program.) I had to do some work-arounds to create the cover I wanted within Word's limitations. The resulting minuscule flaws won't show up on the Amazon ad or in the Kindle book, but they will be glaringly obvious if I use the image on the trade paperback's cover.
I am still mulling what to do. The advantages of the same cover on every edition of a book are obvious. But so are the advantages of tailoring the cover image to the size at which people will view it and the disadvantages of having clear mistakes in the art.
I think some of my answers may lie in digging deeply into Word's more obscure features; somewhere buried under many layers of menu options may lie the solutions to the flaws created by my work-arounds. I will also try making subtle but significant alterations to the design and printing them out at different sizes to see whether I can make the image more suitable for a paperback without altering it significantly.

As more of us try out self-publication, solutions to these and other problems of designing our own books will become common knowledge. In the meantime, we each struggle with producing a high-quality book within the limited financial means we have as writers.

Very good point. We're all still in the process of discovering the way here, and it helps when folks give us their thoughts as they struggle through the process. The cover looks pretty good here. I'm wondering about the difference in print and ebook covers I never really thought of it I guess. I should.