The publisher of Hadley Rille Books and two of the HRB authors have started a new blog on food and cooking in ancient times. The new blog is called "Meal Times: Ancient Foods for Modern Cooks" and is at http://ancientmealtimes.weebly.com/.

Jenny Blackford and I will be the main contributors, but we hope to have many guest bloggers. HRB publisher Eric T. Reynolds may show up occasionally too.

Why start a new blog when I can't keep up with "For Love of Words," you ask?

"Meal Times" is part of the marketing strategy for an ancient foods cookbook that Jenny and I will be putting together for Hadley Rille Books. "Meal Times" will be a place where we can talk about our research, show photos of ancient foods and meals and discuss the process of making them, discuss the progress of our book, talk about the surprises and pitfalls of putting together a cookbook, post recipes that we won't have room for in the cookbook, have photographic essays on techniques used in ancient times, announce new additions to HRB's Archaeology Series of novels, and otherwise entertain people while whetting their appetite for the cookbook to come.

We will post irregularly at first. But soon, I hope, we shall get deeper into our research and shall start posting some of the cool things we are doing, cooking, and reading as part of preparing to write our cookbook.

For example, you may know that I live in Southern California, a stark, bare, mountainous place where it doesn't rain for months at a time. I wondered after moving here how the American Indians survived ... and why they even bothered to settle here in the first place. In February I attended an eye-opening talk on how the many local Native American tribes used local plants; I plan to attend an all-day course on the same topic in June. So you can expect some fascinating posts at "Meal Times" on how these tribes (who had only Stone Age technology) thrived in this harsh place and built up large populations by using local materials and trading with others. 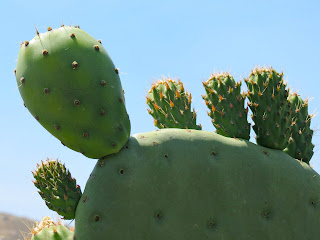 Also, I have a large cactus in my yard. After the talk in February, I bought several books about the local Indian tribes' culture and cuisine. I plan to blog about my attempts to cook cactus leaves and make drinks and sauces from the prickly pear fruit. I may even try my hand this fall at collecting acorns and preparing them to be ground into flour. If I do, I'll discuss it on "Meal Times."

In the meantime, I promise to be more regular about posting here at "For Love at Words." I have taken many cute pictures of baby squirrels and other animals for "Stuff in my yard." Several authors have agreed to be interviewed; I just need to find my list of them. (If you have been wondering why I didn't send you an interview, please contact me.) I am starting a new novel set in ancient Mesopotamia at a interesting and world-changing time—the start of the world's first empire—and I'll be sharing some of the excitement and trials of researching and writing the novel with you.

I hope you'll check out "Meal Times" in the coming weeks and also return here to see whether I've kept my promise.
Posted by Shauna Roberts at 7:39 PM

I am envious of you taking that all-day course in June!

An ancient foods cookbook. That's very cool. I'm gonna have to check out the recipies

So exciting! I love doing this kind of research. Also, good luck with the acorns! I had a friend in school who managed just such a project and baked everyone muffins from the results...fantastic.