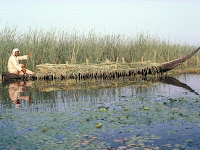 Despite having almost no natural resources, the land between the Tigris and Euphrates (Mesopotamia) was home to the world’s first civilization. The people who settled there made creative use of their meager resources—reeds, rushes, clay, palm trees.

Although most of Mesopotamia was desert, reeds—a general term for any tall, grasslike plant that grows in wet places—grew abundantly along the rivers and canals. The ancient Mesopotamians used reeds to:

•make styluses to write with

•drink beer out of large jars, thus avoiding the sediment at the bottom

•build boats, some with reed structures on them (see seal impressions)

•build houses (with reeds bound together serving as structural supports, bent reeds forming the curved roof, woven reeds serving as walls and "carpeting," and perhaps a clay "skin" for insulation) 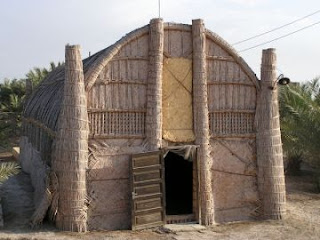 A comparison of ancient carvings of reed houses with modern reed houses suggests reed houses in Mesopotamia have changed little in thousands of years. The Ma'dān (“Marsh Arabs”) of Southern Iraq and some others who live in marshy areas still make reed mats, furniture, and buildings. The picture at left shows a particularly elegant reed house, apparently wired for electricity given the light fixture on the right side.

Carleen Brice is running a poll at her White Readers Read Black Authors blog. She invites you to stop by and cast a vote for whether you think bookstores should have a separate section for African-American fiction.

Posted by Shauna Roberts at 3:01 PM

That is a gorgeous place. Looks earthy and cool at the same time. Yes, human civilizations have often been amazingly innovative. I wish we could apply that kind of creative thinking all the time.

Very interesting. Especially seeing an entire house made from reeds. I wonder how long a project like that would take.

Thanks for the interesting look at this time period, a place to consider for fantasy stories.

I have an award and meme waiting for you on my blog.

I want some reeds!!

Imagine what laptops and cellphones would look like if the Sumerian empire had stayed on top...

What a great photo! Sounds like the researching/writing is going well? Thanks for the link.

CHARLES, I agree. I wish indigenous architecture were appreciated more. There would have been a lot less damage in Louisiana after the federal levees broke if builders hadn't started using slab construction instead of raising houses.

RAE ANN, I bet a house this nice took some time to put together. But some of the other reed houses are more like a tent frame with reed mats draped over them. Those probably go together quickly.

BARBARA, thank you again for the award. I'll put up my post today.

STEVE, I'd love to see the house you'd build out of reeds.

CARLEEN, thank you and you're welcome. Yes, the writing is going well. I turned in the book Sunday and now am catching up on things as I wait to hear what changes the editor wants.

Im a little late to this blog but I was referred from Charlle's blog.

I never realized they even made their buildings out of the reeds! It makes sense due to it being the only available resource in abundance, but that is a lot of work! The building pictured looks magnificant; esxpecially when you think of all the hard work that was put into it. A google search shows many more similiar buildings, truly fascinating.

Unfortunately I don't remember the details right now, but I did learn some years ago about the healing properties of reeds, as well...that they're particularly helpful in healing lacerations.

BEST FANTASY AND SCIENCE FICTION, thanks for stopping by. Human ingenuity really bloomed in that part of the world.

LANA, that's fascinating that reeds have medical uses. I wonder whether those go back to Sumerian times as well?