I came across this meme on Julianne Douglas’s Writing the Renaissance blog and found it thought provoking. She didn’t tag anyone, but invited her readers to try it, so I did.

2. What book do you own the most copies of?
The Bible. And I’m an agnostic. Go figure.

3. Did it bother you that both those questions ended with a preposition?
No. As a copyeditor, I believe ending a sentence with a preposition or other weak word is better than writing a convoluted, unnatural sentence.

4. What fictional character are you secretly in love with?
It wouldn’t be a secret if I told you. 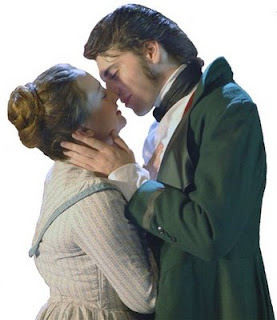 5. What book have you read the most times in your life (excluding children's picture books)?
Jane Eyre

6. What was your favorite book when you were ten years old?
Jane Eyre

7. What is the worst book you've read in the past year?
Dawn of Empire by Sam Barone. Many factors contributed to the beginning of civilization in ancient Mesopotamia, and Mr. B. ignored them all except the need to band together for protection from enemies. This is a wish-fulfillment book for guys about guys.

8. What is the best book you've read in the last year?
I’ve read a lot of great books in the past year, and many were by friends, so I’ll abstain so as not to hurt anyone's feelings.

9. If you could force everyone to read one book, what would it be?
I’d love it if everyone read a good romance novel and a good science fiction or fantasy novel so that I no longer wear down my teeth clenching my jaw when people make fun of genre books and the people who read them.

10. Who deserves to win the next Nobel Prize for literature?
I don’t read much literary fiction, so I’ll pass on this one.

11. What book would you most like to see made into a movie?
The Lions of Al-Rassan by Guy Gavriel Kay

12. What book would you least like to see made into a movie?
The Lost Duke of Wyndham by Julia Quinn. I doubt any movie could do this fun book justice, and the dialog is so delicious that many scenes need to be read several times before moving forward.

13. Describe your weirdest dream involving a writer, book, or literary character.
When I was in college, I usually spent Thanksgiving with my uncle and his family. He liked to read suspense novels, and I always read books from his library when visiting. One morning when I woke up in a strange bed in a strange room, for perhaps thirty seconds I believed I was the hero of the spy novel I had been reading the evening before.

14. What is the most lowbrow book you read as an adult?
Before the Flood, I had a fantasy book. Its tone changed from section to section, it had an gratuitous torture scene, and the plot was stupid and unoriginal, yet I I loved it for no reason I can put a finger on. I can’t remember its name.

15. What is the most difficult book you've ever read?
The History of the Peloponnesian War by Thucydides. I struggled long and hard through that book—in English—for an undergraduate class, and when I finished, I had no idea who won the war.

16. What is the most obscure Shakespeare play you've ever seen?
Once in Chicago I saw a Kabuki version of “MacBeth.”

17. Do you prefer the French or the Russians?
the French

18. Roth or Updike?
I don’t care for Roth, but haven’t read Updike.

20. Shakespeare, Milton, or Chaucer?
Hard one. I’ll say Milton only because he’s the easiest read for the modern reader, although Chaucer and Shakespeare both have had more influence on me as a writer.

21. Austin or Eliot?
I am ashamed to admit I have read neither, although both Emma and Persuasion are sitting on my to-read pile.

22. What is the biggest or most embarrassing gap in your reading?
Acoustics and the physics of sound. A musician should understand these things, but I don’t.

23. What is your favorite novel?
Jane Eyre

24. Favorite play?
“Judith” by a 20th-century German playwright (again, the Flood destroyed my copy, so I don’t know who the author is. Do you?). I hated the play when I read it in 1975 or 1976, but it has stayed with me since and strongly influenced my depiction of my heroine in my forthcoming book, Like Mayflies in a Stream. 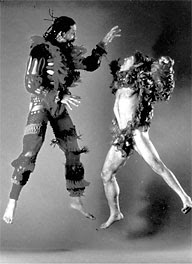 My second favorite is “Warp,” a wacky three-part so-called "science fiction epic-adventure" put on by the Organic Theater Company in Chicago. (At right, the good guy [left] fights his evil twin brother.)

26. Favorite Essay?
I'm generally not a fan of the essay.

27. Favorite short story?
""Gwilan's Harp" by Ursula Le Guin. When I read it for the first time in 1977 in Redbook, I really disliked it for what I saw as its lack of hope. With more maturity, I realized its message was the epitome of hope: No matter how much you lose, there’s always something worth living for. I’ve read it several times since for inspiration when life was bleak or meaningless.

30. Who is the most overrated writer alive today?
We’ll know in a hundred years or so.

31. What is your desert island book?
The Lions of Al-Rassan by Guy Gavriel Kay

32. What are you reading now?
I usually have several books going at once, and now is no exception. I’m reading The Reincarnationist by M.J. Rose on my Kindle when I’m away from home, The Enchantress of Florence by Salman Rushdie while on the elliptical machine, and The Years of Rice and Salt by Kim Stanley Robinson before bed.

I invite my blog readers to do this meme as well.

Posted by Shauna Roberts at 7:03 PM

I've got more copies of the Bible than anything I think. although I have more total dictionaries. But they are not the same book.

OK, I'm going to do this one,too!Thanks for posting it!

Thanks for the insight. This was interesting. Unfortunately I don't read enough fiction to really partake in this meme, myself. I'd love to see Charles do it, though.

Interesting answers. Come to think of it, I've got a couple of Bibles around here too and a really old Book of Common Prayer. Go figure. Great answers -- I actually got tagged with this meme on FB so I did it as a note there. It makes you stop and think on a few of them!

Greetings, Shauna...I'm trying to catch up on my blog-buddies' postings. It's been a while since I checked in on yours. I like the meme, and may do it on my own blog soon. I enjoyed reading your answers; it's cool to know more about your literary tastes and interests. I think you answered more of the questions than I'll be able to do.

Have you noticed the the Dardos has not been posted yet?? WEll....things have been pretty tough not only around this body of mine, but also other things in life....And I lost the list of the 15 other blogs....waaaa that's gonna be a hard one to remember. Do I have a pass from you to do 5 or 10??? My hand just got back to being able to type with it---barely, (thanks for spell check)....hope my namesake is feeling well physically, you'll have to email me soon. And ignore any rejected email, it's messed up, I still get it at the email I first gave you. Just know I am here for you sweetie, with gentle hugs...
Sha <3

Here, here for making people read a good romance or fantasy novel...and I don't read much of either. But I think it's important that people be allowed to read what they like and not be looked down upon for doing so! Especially since all art is subjective--who's to say that any type of book is "better" than another?

CHARLES, yes, my Bibles are all different versions as well. It's useful to be able to compare different translations when trying to understand the meaning of a verse as well as to be able to choose the most beautiful version of a verse when quoting it.

SCOTT, that's great. I'll come over and see it.

LANA, I'd love to see Charles's answers too.

LISA, I agree. Even for a writer, this meme takes some reflection. I'll check out your Facebook page and see yours.

SPHINX INK, good to see you making the rounds again. Hope you are feeling well.

ARCHAVIST, I had fun doing the meme. I hope you do too.

SHAUNA, you have my pass to do as many or as few of the Dardos as you like. Thanks for stopping by. I've been overwhelmed with work, but I'll stop by your blog (and everyone else's) soon.

CARLEEN, I agree wholeheartedly. I can still remember a few comic books I read decades ago because the stories were so powerful. Worthwhile messages and writing can occur all sorts of places, even the backs of cereal boxes.

Wow, that is similar. Interesting how the different permutations of memes come about. That one has some interesting questions the counted pages meme doesn't.

I guess I have a lot of copies of the Bible as well.