Relics of a future fantasy writer


This week, I’m unpacking all the boxes from our move still sitting outside my office.

Not putting everything away, mind you; my office in the new house has such a different layout from my previous office that I need time to figure out how to organize it. I'm merely taking the first step of getting things out of boxes and onto the floor.

While unpacking, I found books on HTML and making Web sites I've been looking for since we moved. Thank goodness! My science-writing site is terribly out of date, both in its code and in its facts, and now I can update it. I also found my three-hole punch, which has been a drag to live without.

And I found my trolls.

One box contained treasures from my childhood. For decades, I’d moved this box from house to house without unpacking it. Yesterday, I opened it. Inside were my trolls, all eleven of them. How I loved creating a society and a social order for my trolls and those of my sister and friends!

What I had not remembered was how much time I spent sewing outfits and dressing the trolls for their roles. The male trolls got short shrift. Other than a Robin Hood outfit, I found I had made them only plain-jane shirts and pants.

The female trolls were luckier. All were wearing earrings, and one still had on the Play-Doh lipstick I’d applied 40 years ago as well as a rope of fake pearls. My trolls must have had quite the social life; I’d sewn them dozens of ballgowns, some of velvet, and almost all decorated with embroidery, rhinestones, or lace or other trims. They had two fur coats I made from a rabbit pelt. (Note: I disapprove of killing animals to make fur coats.)

Now that I’m grown, have I put away childish things? Definitely not. I’ve merely changed venues. My worldbuilding and costuming now occur on the pages of short story and book manuscripts, and sometimes, glory of glories, I actually get paid for it!

How about you? Did your choice of toys as a child prefigure your current vocation or avocation?

1. My critique partner Farrah Rochon, who was interviewed on this blog on 16 May 2007, celebrated the release of her second book yesterday. Release Me, a contemporary romance novel set in New Orleans, is available from local bookstores and online from Amazon.com and Barnes and Noble. Hip hip hurrah for Farrah!

In a move sure to further annoy black writers already angry about segregation of their books in bookstores, Amazon.com lists Release Me with a subtitle not on the book itself: African American Romance. Don’t worry: No clerk will compare your inner arm to a Skin Reflectance Chart before allowing you to purchase it. Release Me is suitable and enjoyable for people of all colors. 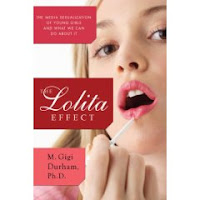 2. On Wednesday, May 28, Ello at Random Acts of Unkindness has as her guest Dr. M. Gigi Durham, author of The Lolita Effect: The Media Sexualization of Young Girls and What We Can Do About It.

If you are concerned by the trend of younger and younger children wearing make-up, dressing like prostitutes, and mimicking the sexy moves of pop stars, stop by Ello’s blog Wednesday and join in the discussion.

Posted by Shauna Roberts at 8:12 PM

What fun reading about your little troll world. :) I used to sew for my Barbie dolls, too.

I created an entire world with Barbie, too. One was married to the Ken doll, but the other Barbie was married to my Michael Jackson action figure (yes, he had the multi-zippered jacket and silver glove). There was always tons of drama in their world. I should have known I would be a storyteller. :)

Thanks for reminding folks that my [i]Romance[/i] will definitely appeal to more than just African Americans, despite how Amazon chooses to label it.

Shauna, I had the classic Lionel train set, complete with the little vibrating stock pen thats sends the cattle into the stock pen. I've spent the last 27 years working for railroads. I also created my own TIME and LIFE magazines, with stories about disasters. So I have some early writing experience, too.

I second Farrah's comment. My local library now has a category called "urban fiction," which, from what I can tell, is just another term for African-American fiction. It seems bizarre that we're segregating African-American literature. We didn't do that with the likes of Richard Wright, James Baldwin, or Toni Morrison.

Congratulations Farrah! Fortunately, I have learned through my blogging friends that not all the fiction is shelved where I thought it would be.

OK here's my weird confession. When I was in about the third grade, I went crazy for Stuart Little. My friend, Corinne and I sewed little mice and made clothes for them. I can't believe I just remembered her name -- I haven't seen her since the 4th grade.

My childhood games definitely affected my later writing. I used the area around our house, with ponds and creeks and so on, as the fantasy setting for many stories that I made up while growing up and later my first published fantasies were based on that same fantasy world, with the ponds as seas and the creeks as rivers.

Since I played a lot with chinaberries, acorns, walnuts and so on, I didn't make any clothes for them, though.

FARRAH, your comment reminded me of how when my sister and I got too old for Barbie and Ken, we gave them to my youngest brother. It worried my father that my brother was "playing with dolls." In fact, my brother staged battles between Ken and G.I. Joe, with Barbie as the collateral damage, being thrown about here and there as the bombs went off.

STEVE, your childhood certainly predicted your later life well. How wonderful when people know from a young age what they want to be when they grow up.

LISA, did you invent stories and adventures for your mice?

CHARLES, I remember you saying that at your own blog. Those of us who spend their childhoods in one place really get that landscape seared into us. Sounds as if you spent as as much time as I did on my knees looking at acorns and bugs and such.

I definitely invented stories and adventures for them. I wanted to BE them. ;)

LISA, don't tell Lana! She would be appalled you wanted to be one of her enemies the squirrels.

SHAUNA, are there any trolls on your desk now? I'm sure they make good writing partners.

Congratulations on unpacking the rest of your boxes. We recently bought bookshelves and unpacked our books. It was so much fun uncovering them, like seeing old friends, almost.

I had Barbie and Ken, but preferred The Sunshine Family dolls. (Does anyone remember them? The baby's name was Sweets.)

Prior to those sophisticated choices I did a lot of my own world building with Fisher Price people, colored blocks, and Play Doh.


May I also say that the cover of Farrah's new novel is fantastic? Wow--maybe the most compelling romance cover I've seen!

My early twenties, I used to buy Barbies and punk them up. Desert Storm Barbie was my favorite, since she already came with combat boots. They'd get pierced, tattooed and Punky Color-ed before going to live in their new homes. They were pretty popular there for awhile...

Reckon I had a good few GI Joes and superheroes, but my real pleasure as a kid was being out in the yard alone, acting out all the parts in elaborate superhero adventures.

I'm a little out of the loop lately. Congrats on the new home!

RAE ANN, this may sound terrible, but after looking at all my trolls and each outfit, I threw them in the trash.

THERESE, I don't remember the Sunshine Family of dolls. You're certainly right about Farrah's cover. It took my breath away when I first saw it. It wouldn't surprise me if people bought the book just for the cover and never read the story.

STEVE, your punked-up Barbies sound cool! Did you create your own adventures or play out ones you'd read or seen in movies?

BILLY, thanks. We left New Orleans in September, but we're still getting settled and unpacked, so we still feel brand new here.

Shauna, you may have thrown away a fortune. That troll collection--with handmade clothing and accessories, yet--may have been a big seller on eBay! Or not.

SPHINX INK, I did check eBay before throwing those trolls away. Trolls were going for about $5, which seemed hardly worth the time and effort of auctioning. The clothes would not have added to their value. My sewing skills in those days were, to put it kindly, execrable. (I do take pride in the quality of the designs, though.)