June Shaw’s mystery Relative Danger features Cealie Gunther, a widow who interrupts her journey to rediscover herself when the murder of a janitor at her granddaughter’s high school threatens the teenager’s future.


June, thank you for visiting my blog, and congratulations on the publication of your first novel. 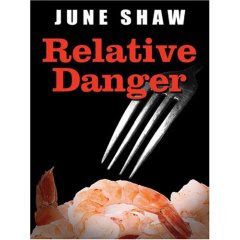 Thank you, Shauna. It was thrilling to finally sell a novel. And now I’ve also sold the sequel. That’s exiting, too.

Congratulations on the second sale as well! Your route to publication is one of the longest and most circuitous I've heard of. Could you briefly summarize the obstacles you encountered and how you eventually triumphed?

I decided I wanted to be a writer when I was in ninth grade. None of my teachers had us do creative writing, and I kept busy throughout high school and married right afterward. During the next six years, I gave birth to five children. (Good Catholic or sex fiend? people asked. Both, I replied.) My husband died when they were young. Once my head cleared, I completed a college education and started teaching.

Some time after that, I realized I finally had a little time. I would become a writer. But I’d mainly read college textbooks and the backs of cereal boxes. I found time to read and try writing shorter pieces, and I sold a few essays. I progressed to plays and won a contest in Boston. A short screenplay I wrote aired on a channel for the arts in New Orleans. But I decided I’d write novels and stick to them.

I had become a grandmother by the time I sold a novel, which made the success especially fulfilling. My grandkids think it’s pretty cool that I’m writing books, although I tell them I’m writing PG13, and they can’t read them till they’re teenagers. (I’ve been surprised at how many teens are enjoying my book.) 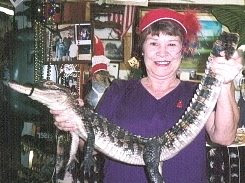 Even though you are a lifelong resident of southern Louisiana, you chose to set your novel in Chicago. Why there and not the more colorful and interesting locale you're familiar with?

In my series of humorous mysteries, probably the fourth book will take place down here. I was tied down so long with five children and grading papers for English classes and didn’t get to travel much. My main character, Cealie Gunther, owns a successful copyediting agency that managers run, so she has all the time and money she needs to travel. I need to go with her to try to keep her out of trouble—a challenging task.

We enjoyed traveling to Chicago and love Gatlinburg, so she needed to go there. I’m working on the third book. A few gals that Cealie went to school with will be cruising in Alaska and want her to join them. Hey, somebody’s got to do lots of research, right? Although some of the people working on the ship looked at me funny when I asked, “Where would be a good place to find a body?”

Cealie embodies a stage of life that has been underrepresented in fiction: the stage of losses and new freedoms of the older retired woman. Cealie can now live out her dreams, but the benefits of aging come at a cost. Were editors leery of taking on a book with an older heroine?

I didn’t hear any complaints.

What was your favorite part of writing Relative Danger?

I love the humorous sections. And the suspenseful ones. And the sexy ones. I really enjoyed the whole thing. The book is fun. So are the characters. I love being with them, especially to find out what Cealie will do next.

I rise at 7:30, read my Daily Word, and bring coffee to the computer. My mom, who will be one hundred and two in June, lives with me now because of macular degeneration. When I hear her in the kitchen, I fix breakfast and we chat a little. Then I write, with breaks, till around noon. That’s enough creative time for my brain. At other periods during the day I check e-mail and read. I would only suggest my writing regimen if it works for someone else. Oh, and I leave the computer once a week so Mom and I can get to line dance classes.

Is your next book also a mystery featuring Cealie? What's up next for her?

Yes! Killer Cousins comes out in January. Cealie will detour from a planned exotic vacation to help another family member who appears to be in danger—or could be lying about her connection to a murderer. Of course Cealie will create even more trouble. And her hunky sometimes-ex-lover, Gil Thurman, might happen to drop in for the grand opening of another of his Cajun restaurants. And Cealie again might be tempted…

Thank you again for visiting my blog to talk about your book.

I’m so happy to be here. Thanks for inviting me, Shauna.


June Shaw's Website is at http://www.juneshaw.com. Her book, Relative Danger, published by Five Star, an imprint of Thomson Gale, is available online in hardback and large print from Amazon.com and Barnes & Noble.

Nice interview and a nice introduction to Ms. Shaw.

Great interview! I really enjoyed it (and love the photos!!)

Thank you, Shauna, for a great interview.

And hello June! I love your explanation of why Cealie's story is not set in New Orleans. Enjoy your travels.

Congratulations on your selling your second novel as well, June.

All the best and continued success...

Cool. It's fun to hear about other writers' routes to publication. I'm so thrilled that after all she went through that she was able to get back to her early love of writing.

SIDNEY, YOGAMUM, RAE ANN, MICHELE, and CHARLES, glad you enjoyed it. I hope June stops by later to see your wishes for her.

CHARLES, It's inspiring to hear about someone who never lost her dream, even though she had to put it off for a long while, and then not only pursued it but met with success. The path to publication can be so slow, so I enjoy reminders that sticking with it can eventually produce results.

P.S. Wouldn't it be great if we all were still enjoying Mardi Gras at age 102 as June's mother clearly is?

Another great interview Shauna. The book sounds great and Ms. Shaw's journey to publication is both inspiring and motivating.

But I think I'm most inspired to think that Ms. Shaw's 102 year old mother goes line dancing every week!

Shauna, what a great interview! The first book I ever read was a mystery, age eight. And I always enjoy hearing from a writer in my home town. This book sounds like a winner!

OK line dancing at 102??! That is beyond cool! June sounds like a spitfire too. I love that she seems to be having so much fun writing. Sometimes it's easy to forget that, duh!, it's supposed to be fun!

LISA, thanks. Yes, both June and her mother are very inspiring. A good reminder that it's never too late to live your dreams.

BILLY, thanks! Did you ever read the Freddy the Pig books? That was the first mystery series I read as a kid, I believe. It was about a pig that solved mysteries while wearing a Sherlock Holmes cap.

CARLEEN, I agree. I don't know June very well, so this interview was especially fun because it was full of surprises about her life.

I never tire of hearing June's story. Thanks for the great interview, Shauna!