Ann Gimpel writes paranormal romance, fantasy, and science fiction. She has had thirteen novels published, as well as many novellas and short stories. Her most recent novel is Earth’s Blood (Musa Publishing), which was released 7 February. 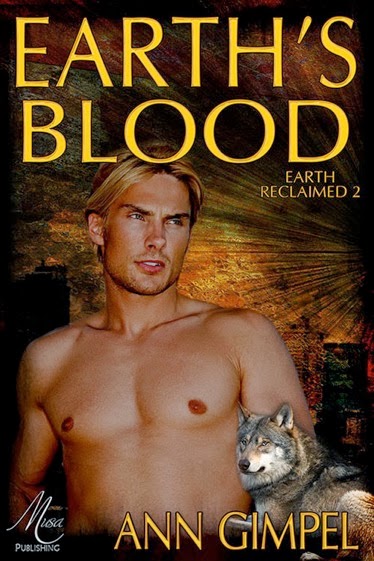 Welcome, Ann! Thanks for stopping by my blog to talk about your writing and your novels.

Thanks so much for inviting me, Shauna. It’s a pleasure to be here.

Why did you choose small e-presses to publish your books rather than self-publishing, and what do you think the advantages and disadvantages of having more than one publisher are?

The answer is pretty straightforward. When I started writing, I knew less than nothing about the publishing industry. I needed a publisher for a whole lot of things including editing, cover art, and formatting the manuscript for publication. As time has elapsed, I’ve found I enjoy the camaraderie of other authors who write for the same publishers I do. I appreciate having many sets of eyes on my manuscripts and professional cover art, so I’ve stuck with small presses.

What drew you to dragons? What makes your dragons different from other authors’ dragons?

I don’t plan what I’m going to write about. Stories come to me both before and as I’m writing them. I’ve learned to trust my muse, and here of late she’s been enamored with dragons. Four of my books have featured them.

My dragon shifters (To Love a Highland Dragon and Dragon Maid) are different because the mage and the dragon are actually separate beings, each with their own personalities. They started out that way and used strong magic to merge into one form (and back to two again when the need arises), and there was no reason for their separate identities to blur. The dragons in Earth’s Requiem and Earth’s Blood are gods. One is Nidhogg, the Norse dragon god, and the other Dewi, the blood-red Celtic dragon goddess. I tried to keep them true to their mythological roots.

What was your favorite part of writing Earth’s Blood?

Um, I can’t tell because it would be a huge plot spoiler. My second-favorite part was having an opportunity to flesh out Dewi’s character. She actually has some POV chapters in this book and becomes a much more sympathetic character for the reader than in earlier books of the series. One of my beta readers said Dewi is now her favorite character. After Fionn, of course. All the ladies adore Fionn—me included.


What effect has your training as a psychologist had on your novels?

It’s had an effect on two levels. The first, and most obvious, is I have a fairly decent understanding of people, which has helped me create believable characters. That part of my writing was strong from the start, but I had to teach myself plotting, pacing, and holding enough tension so readers weren’t bored to tears.

The second aspect where psychology comes into play is I spent quite a bit of time training to be a Jungian analyst, so I’ve done a lot of dream work (both my own and with patients). It’s given me an appreciation for how integral shadow is to our lives and how much energy people expend trying to hide their shadow sides. I also have a solid grounding in mythology. It’s not accidental myths creep into most of my stories and the Celtic gods show up frequently as well.

Are there certain themes or topics you’re drawn to repeatedly in your writing?

Dystopian themes. I think it’s because I’m so worried about man’s impact on Earth and how little we’re doing to ameliorate our impact on the planet that supports us.

I generally exercise in the morning, come home for lunch, and spend the afternoon writing. But there are days when I’m up at five a.m. and writing, and other days I’m writing at ten o’clock at night. Each author has to find what works for them. Part of it depends on one’s circadian clock. I’m sharper in the morning than I am late at night, but sometimes when a story is flowing I just drop everything and go with it.

Set a time frame. Don’t be afraid to finish the book. It won’t be perfect, because none of them are, but it will be ready to edit. Develop a thick skin and seek critiques, but don’t feel you have to change every single thing people point out. As an example, some critiquers will love your ending, others will hate it. It’s impossible to please everyone, so you have to decide if a particular criticism is justified. It’s actually possible to step back far enough from your work to do this. You’ll find out quick enough how correct you were once the book is published and reviews start rolling in.

My only other piece of advice is not to perseverate on a single book. Your best marketing tool is your next book.

What promotion methods have been the most successful for you?

That’s really hard to answer. I’ve had six books sell very well, and twice that number do not do nearly as well. Since I used the same promotional methods for all of them, I have no idea why they worked for some, but not others. I think there’s a bit of magic in which books sell and which don’t, but if a book hasn’t done much in the first six weeks after release, chances are it won’t grow wings and fly.

My next book is Witch’s Bounty and it releases March 6th from Taliesin Publishing. It’s a dark paranormal romance. Here’s the tagline and blurb:

Tagline: A demon-stalking witch teams up with a Sidhe, but their combined power, never mind their love, may be too late to make a difference.

Blurb:
One of only three remaining demon-stalking witches, Colleen is almost the last of her kind. Along with her familiar, a changeling spirit, she was hoping for a few months of quiet, running a small magicians’ supply store in Fairbanks, Alaska. Peace isn’t in the cards, though. Demons are raising hell in Seattle. She’s on her way out the door to help when a Sidhe shows up and demands she accompany him to northern England to quell a demon uprising there.

Duncan swallowed uneasy feelings when the Sidhe foisted demon containment off onto the witches two hundred years before. He’s annoyed when the Sidhe leader sends him to haul a witch across the Atlantic to bail them out. Until he sees the witch in question. Colleen is unquestionably the most beautiful woman he’s ever laid eyes on. Strong and gutsy, too. When she refuses to come with him because she’s needed in Seattle, he immediately offers his assistance. Anything to remain in her presence.

Colleen can’t believe how gorgeous the Sidhe is, but she doesn’t have time for such nonsense. She and fellow witches Jenna and Roz are the only hedge Earth has against being overrun by Hell’s minions. Even with help from a powerful magic wielder like Duncan, the odds aren’t good, and the demons know it. Sensing victory is within their grasp, they close in for the kill.

Thank you for visiting today, and best wishes on your writing endeavors.

Thanks so much for hosting me, Shauna. You’re always welcome on my blog.

You can learn more about Ann Gimpel and her many books by visiting her Website at http://www.anngimpel.com and her blog at http://anngimpel.blogspot.com/. Earth’s Blood is available online at Amazon.com, Barnes and Noble, iBooks, Kobo, All Romance E-books, and Musa Publishing. Witch’s Bounty will be available online starting 6 March 2014 at Taliesin Publishing as well as at Amazon.com, iBooks, All Romance E-books, Kobo, and Barnes and Noble.
Posted by Shauna Roberts at 10:00 AM

Thanks so much for hosting me, Shauna, and for a thoughtful and in-depth interview. Aislinn, Fionn and the rest of the cast of Earth's Blood are excited to be here.

I'm a psychologist too, though of the experimental/biological variety. I sometimes wonder if my knowledge of psych has really helped me understand people. They are most baffling. :)

You're welcome, Ann. Glad to have you!

CHARLES, I know what you mean. I did my dissertation on mate choice (in pigeons), and I'm still just as baffled by how pigeons and people chose mates.