The art of the holiday letter


It's the time of year when people sit down to write a letter to someone far away. No, I'm not talking about Santa. Rather, I mean the letter some people enclose with their holiday greetings. 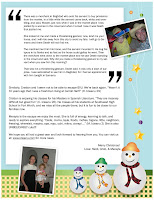 Some people hate getting holiday letters, particularly photocopied ones.

I love seeing how people's children have grown and changed, finding out about people's new hobbies and adventures they've had, and reconnecting with people who live far away. I feel so disappointed when I tear open the envelope of a holiday card and find nothing on the card but a signature, unless it's from a friend I communicate with often.

I've been preparing our holiday letter this week and so have been thinking about one should include and what one should leave out, which led to the creation of this set of guidelines:

Are you a holiday note lover like me, or do you say, "Bah, Humbug!" when you open a Christmas card and a letter drops out? How do you think holiday letters could be improved?

I do e-mail holiday letters, and I've taken to treating them as writing exercises. Last year, it the letter was a snarky arts review. The year before, a report from a private detective.

Awww, you make them sound so fun. :)
One small drawback to life as a Nomadic Gypsy Pirate is that holiday letters play no part...

In fact, quite a few recent contacts have run along the lines of, "Damn, you're still ALIVE?!" ;-p

I did a variation on this for a few years when Josh was small, mostly with news about him and various funny things that happened to us. I kind of wish I had those now but they are long lost on an old computer. I don't even know if I have hard copies anywhere.

KEN, we've sometimes done theme holiday letters in years in which nothing much happened. It's a fun exercise.

STEVE, you may be a Wandering Gypsy Pirate, but as long as you have your computer, you can get holiday greetings. HAPPY HOLIDAYS, STEVE! (And if you ask nicely, I'll even email you our holiday newsletter and then you'll have at least one.)

CHARLES, the holiday letters from people with young kids are usually the most fun to read, because they're all about the kids' crazy antics.

I enjoy receiving such letters & wish I were better about sending them!
Happy New Year. My best to you & yours. :)