Welcome, Steve, and congratulations on publication of Crossroad Blues! 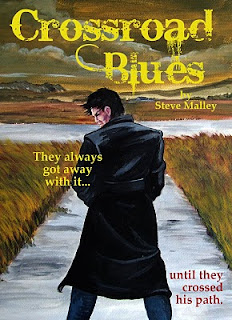 Thanks for having me, Shauna. ☺

What was your favorite part of writing Crossroad Blues?

The last few days of the first draft, when the end was coming fast and hard, and I couldn't get the words out fast enough. It was an exhilarating time. I couldn't wait to find out how the story would end!

Every character in Crossroad Blues is alienated from other people and from society itself, and even the landscape is unfriendly. Does this reflect your own history or view of life in any way?

Good question. To be honest, I hadn't seen that sense of alienation until you pointed it out. I intended Crossroad Blues as a modern-day Western, complete with evil rancher, a heroine with fire in her blood, and the quiet stranger who rides into town. That sense of isolation and alienation was completely unconscious.

Besides alienation, are there other themes or topics you’re drawn to in your writing?

I just try to ride the stories where they want to go. Often, in the beginning, I'm groping for colored threads in a twilight landscape. Most of what I find is usually wrong. By the end I've usually got a tiger by the tail and no way to control it. Theme and topic develop entirely on their own.

That said, some stuff does pop up again and again in my work: The morality of violence. Past sins returning to poison the present. The self-serving, untrustworthy nature of authority. Predators favoring victims at the edges of society because nobody gives a damn.

Why have you chosen to write in so many genres? 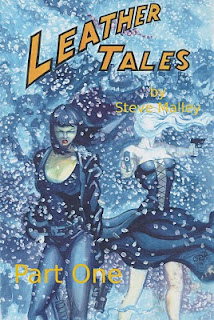 I'm not sure I have a choice. Whatever comes bubbling up out of that stinking marsh at the bottom of the basement stairs, I grab it and run. I see a character or two. A situation. Some scrap of emotion. It's not until I'm hips-deep in the story that I discover what I'm writing about.

• LeatherTales (graphic novel/noir) was a meditation on violence and second chances wrapped around lesbian assassins taking on the mob.

• Templar (graphic novel/adventure) was about a kid growing up in her father's shadow, told as DaVinci Code meets James Bond.

• The Serina graphic novels (graphic novel/erotica/autobio) were about my time in New Orleans and the pain of trying to love an addict.

• Poison Door (crime/thriller) explores legacies of violence and cycles of abuse against the backdrop of a drug war and stolen children.

•A Legacy of Teeth (horror) has family secrets leading to a zombie plague.

• Blood and Skin (paranormal suspense) is very much about the past poisoning the present—with ghosts, revenants, black magic, and tattoos. I've just finished my last rewrite on Buried—in which a young woman returns home after a long absence and all hell breaks loose—and started writing a Steampunk adventure.

For three or four years, I woke up early every morning and wrote at least a thousand words a day. Crossroad Blues was written during that period. It was great: three months to a first draft, then the rewrites.

Things changed. This past year and a half has been full of upheaval and opportunity, bad luck, blessings and trouble. I spent a lot of it with notebooks and a fountain pen, writing in snatches whenever I could. Lately, I've been doing most of my writing at night.

All I can say is, that damn story took another step forward every day.

My best advice for aspiring authors:
Keep. Fucking. Moving. Do not look back. Go forward to the end. No matter what, no matter when or where or how, keep writing ’til you hit The End.

You’ve chosen to self-publish some of your novels as e-books rather pursue a traditional publisher and paper books. Why did you do this, what expectations do you have for your e-books, and how did you choose which manuscripts to self-publish?

I've got a fantastic agent, Anne Hawkins of JHA Literary, shopping Poison Door right now. She'll also get first look at Buried and anything else I write that might suit her.

Thing is, she represents my literary thrillers. She doesn't handle graphic novels, horror, paranormal, action, erotica, or adventure. For that stuff, I'm on my own.

For a long time I wondered whether my “other work” would ever see the light of day. Thanks to the explosive growth of the e-book market, all those stories are able to find readers!

What other books will you be releasing soon?

Serina vol.1 is waiting for a new cover painting, probably next week. Templar will be out once I resolve some technical issues. I've got a couple more passes to make on Blood and Skin before that one's available. After that, probably A Legacy of Teeth. ...

There's a reason my blog is called “Full Throttle”! ☺

You are also a professional artist, illustrator, and tattoo artist. How does your artistic career help or hinder your writing?

On the one hand, it's like I've got this really wide pipeline to the unconscious: Stuff comes at me as fast as I can draw, paint, tattoo, or write it. On the other, like any other job it's a challenge carving out the time to write. The landlord wants his money no matter what's going on with my latest novel.

Steve, thanks for visiting my blog, and good luck with your e-publishing endeavors.


You can learn more about Steve and Crossroad Blues by visiting his Website at http://www.SteveMalley.com and his blog at http://Steve-Malley.blogspot.com/. Crossroad Blues is available in Kindle format from Amazon.com and in multiple formats from Smashwords.com. His re-released graphic e-novel Leather Tales is also available from Amazon.com and Smashwords.com.

CONTEST: My third annual birthday contest is still going on. Comment on last week’s post by 11 p.m. Pacific time on Saturday, 25 September, to enter to win your choice of a trade paperback copy of my historical novel Like Mayflies in a Stream or a $10 gift certificate for Amazon.com or Barnes & Noble (winner's choice).

Great interview, and Crossroad Blues is a dynamite book. A real page turner.

"Crossroad Blues" is definitely a must-read. Fun from beginning to end. Steve's what you call one of the gifted ones.

Awww, thanks guys! And Avery, were you to repeat your thoughts in an Amazon review, etc. I wouldn't mind... ;-)

CHARLES, thanks for stopping by.

AVERY, when Steve was born, all the muses rushed over, eager to be the one to endow him with her gifts. None was willing to yield to the others, so they got into a hair-pulling, ear-biting, yowling fight and didn't stop until they collapsed on the floor around the crib, their robes torn and bloody and their wreaths of flowers askew. On the floor, they continued wrestling until they collapsed on top of each other from exhaustion. Tired of fighting, they decided that each one could give Steve a gift. And so it came to be that Steve was blessed not with one talent, but all of them. The End.

Shauna, you are *way* too kind! Closer to the truth to say I just had a whole lot of years where I couldn't get pretty girls to talk to me. ;-p

Sorry I'm late to the party, Shauna and Steve! Great interview. When I think about all you do and still write, Steve, I feel ashamed about how little progress I make on my own writing.

ERIK, LANA, and CANDICE, glad you enjoyed the interview.