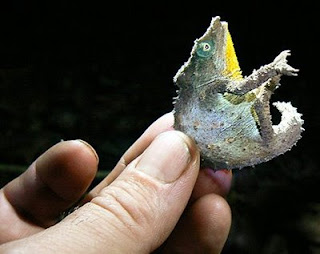 The incredibly cute pygmy chameleon species at right was first discovered this past fall. Researchers credit its survival and that of other rare plants and animals that live with it in a forest in northern Mozambique to a long civil war, which has damaged roads and so made it difficult to reach the forest. 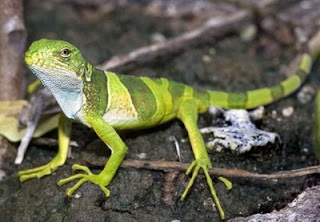 Brachylophus bulabula (left) is another newly discovered lizard. It lives in wet forests on a Fiji island. It is one of only three iguana species left in Fiji, and all are in danger. People have eaten some species to extinction and introduced cats (which eat iguanas) and goats (which compete with the iguanas for food). 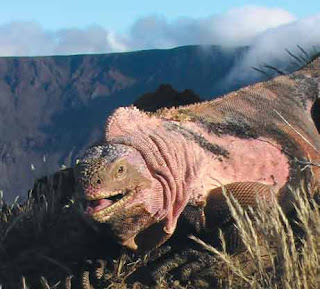 Conolophus rosada (right) is found only on one volcano in the Galapagos Islands. Discovered in 1986 and thought to be a variant of another kind of iguana, it was last month announced to be a new species. Its tiny population may be in danger because of introduced cats and goats. 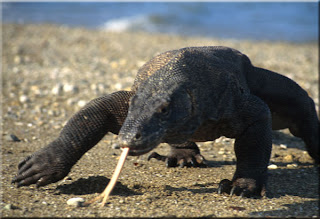 In the Komodo National Park in Indonesia, according to the Wall Street Journal, human interference has broken an ancient symbiosis between komodo dragons and humans. Until recently, people revered the dragons and left them offerings of goats and deer parts. Dragons left the people alone, both because the long-lived lizards recognized the people who fed them and because dogs kept the huge dragons from getting too close to homes.

Then park authorities—ironically, on advice from environmentalists— banned deer hunting and goat sacrifice and outlawed dogs. As a result, the komodo dragons now must hunt all their own food, and they go for the easy pickings in the villages, eating chickens, goats, and the occasional person. For the full story, see the article “When Good Lizards Go Bad.” 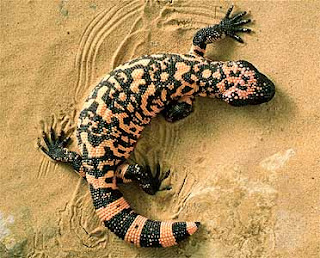 In addition to being beautiful and interesting creatures, lizards prey on species humans consider pests. Lizards are useful in other ways as well. The rare Gila monster (Heloderma suspectum, at right), which lives in the Southwest and in Mexico, has poisonous saliva. An analog of a chemical in the saliva is now an injectable type 2 diabetes drug called exenatide (Byetta). Exenatide boosts insulin secretion, but only when blood glucose levels are high, thus making hypoglycemia unlikely.

Posted by Shauna Roberts at 3:32 PM

Cool post. I'll sit down with my boys tonight and let them see it.

They are all beautiful (from a distance, of course. All reptiles scare the hell out of me). The last entry on Exenatide is fascinating! Perhaps this could lead to a way to marry glucose detection and injected insulin for Type 1 diabetics. That would a huge breakthrough.

They are all magnificent creatures. Just like me really

It's so cool to hear and read about new species of animals still being discovered or identified. Especially cool about that Galapagos Iguana.

The Galapagos Pink Iguana is now considered to be part of this Laboratory of Evolution known as the Galapagos Islands.

The pink iguana is characterized by multiple series of very rapid ups and downs of the head. For its pattern and the frequency of ups and downs the pink iguana has no match with any of the other species or populations of land iguanas in the Galapagos.

TRAVIS, I hope your boys enjoyed the lizards.

LISA, there has been great progress in diabetes treatment and monitoring lately that is only starting to trickle down to regular people (as opposed to people attending cutting-edge clinics). Some turn out to have unknown side effects when used in a larger population, but exenatide seems really safe so far, despite being based on venom.

GARY, if I didn't already know you were an actor, I would have guessed it from your comment. :-) Thanks for stopping by.

CHARLES, it continues to amaze me how frequently new plants or animals are discovered. I love to read the news stories about how they were found.

ZURI, I really appreciate your stopping by to tell us more about the new pink iguana and for providing a link. I for one wanted to know more than the news stories told.

Thanks for sharing all of the interesting info & the lovely photos. I've always been drawn to lizards & other reptiles. Even as a child I had some green anoles as pets (I'd forgotten that until I moved down here & saw them in the wild, which was a wild experience, to be sure!)

Interesting, I see reptiles and run!

Very interesting. The Komodo reminds me of visiting the Audubon Zoo.

Pretty pics. I've always kinda liked lizards. My mom was never afraid of them so I grew up fascinated by them.

LANA, I've never had lizards as pets, but I love anoles and really enjoyed seeing them in my yard in New Orleans. Too bad we didn't know each other when I lived in La.—we seem to have a lot in common.

SIDNEY, everyone has their little quirks. I spent my childhood terrified of rubber bands.

RAE ANN, I first learned about Komodo dragons when the Audubon Zoo got one. Too bad its enclosure is so small.

Thanks, CARLEEN. Isn't it interesting how much one's mother's fears influence one's own?

BARBARA, so glad you enjoyed learning about the lizards.