More on dictionaries; some good news 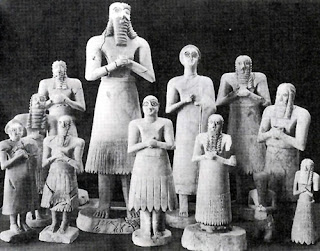 I'm still chugging away on my first draft of Like Mayflies in a Stream, my novel about ancient Sumer. I had hoped to be done with the first draft by now, but some of the early chapters came hard. Now that I'm approaching the finish line, my fingers are typing faster and faster.

The Sumerian dictionary I mentioned having in last week's post is not just a novelty item. I find myself using it many times a day. Were there leopards in those days, or chairs, or mattresses? The quickest way to find out is to check the dictionary and see whether they had a word for it.

I've also found the dictionary a valuable glimpse into how the Sumerians categorized their world and what distinctions they found important to make.

•There were many words for beer and many for bread. Beer and bread were the staples of their diet, and they made many kinds of each.

•Some words mean "dung" in general, but "sheep dung" is a distinct word.

•I believe we have four words for sheep in English: sheep, ram, ewe, lamb. The Sumerians had at least eighteen, including words for a wild ram, a domesticated ram, a fattened sheep, a female lamb, a male lamb, a suckling lamb, a perfect sheep (which was the only kind suitable to feed to a god), and a slaughtered sheep. (Sumerian was a concatenating language like German, so although some of these were distinct, unique words, others were constructed by adding an adjective to the word "sheep.") The Sumerians also many words for shepherd, some of which identified what kind of sheep were cared for.

I had some great news yesterday. My story "The Hunt" (previously published in Continuum Science Fiction) has been picked up for republication by Jim Baen's Universe. It is currently slated for the April 2010 (yes, 2010) issue and should get much wider exposure than it did the first time around.

Posted by Shauna Roberts at 5:58 PM

Congratulations on the story! And -- thanks for enlightening us on the Sumerians. Who'd have imagined so many words for sheep! Language is fascinating.

This sounds like an interesting book. Any culture with many words for beer is a great civilization in my book.

Take care,and I can't wait to read the book!

Excellent on the reprint. That's a very nice publication. Congrats.

I didn't really think how useful a dictionary would be for research like you mention here. Cool.

This makes me want to get a Sumerian dictionary. :D

And congrats on the reprint! [applause]

Congratulations on the republication! Also, good point on the dictionary & if there was a word for something. You're a clever girl!

LISA, thanks! I've found the Sumerian dictionary fascinating to browse through. The Sumerians paint themselves (and archaeologists paint them) as very urban. But with so many categories for sheep (and nearly as many for cows), I now wonder whether small villages were more common than we've thought.

SCOTT, I agree. Ancient Sumer was probably a much more pleasant place to live than any time in Europe before the 1800s.

CHARLES, thanks! I didn't realize the possibilities of the dictionary myself at first. Now I keep that file open constantly when I write.

ANGIE, the Sumerian dictionary can be found as a PDF at http://www.sumerian.org/sumerian.pdf . And thanks for the congrats!

Thanks, LANA, nice to see you here.

Congratulations on the reprint!

Shauna, congratulations on the reprint of your story. I bet you're glad to be on the home stretch with the first draft of your novel. The first chapters of a new manuscript are always the hardest for me.

Excellent news - looks like this has been a good news day all around. I just sold my second novel.

Congratulations on the reprint! That's fantastic. :)

And wow, what a fascinating setting for your story... I can't wait to hear more about it! It's no wonder it took you a bit longer than you'd thought it would to write that first draft--all those details.

Fascinating post! And great news about your story--you're on a roll!

Congrats! It's great you're getting more exposure.

Extremely late chiming in with my congrats on the short story publication.

My question: did *they* have a plural for sheep?

Sorry, everyone, for being late responding to your kind comments.

RAE ANN, thanks. I finished the first draft of the novel last week, took some time to catch up on other work and dentist visits, and am starting the second draft today as soon as I finish responding to blog comments.

GARY, congratulations again on selling a second novel. This has been a great year for your writing already and it's only February.

MICHELE, thanks! It was good to see you Saturday after so long communicating only by blog. Yeah, researching the details takes some time, especially because experts contradict each other in their interpretations of the sparse evidence.

Thanks , CARLEEN. I hope the roll keeps going.

VIRGINIA LADY and FARRAH, thanks!

STEVE, good question. I'm not sure how or whether singular "sheep" and plural "sheep" were distinguished. Sumerian does have plural endings equivalent to s/es/en in English, but I couldn't find whether "sheep" took such an ending.