Microsoft Word or black gel ink pen and lined yellow legal pad? Coffee shop or home office? Webster’s Third New International or the Complete Oxford? All writers, it seems, have strong preferences for the tools and working conditions they need to produce well, down to the music they listen to. 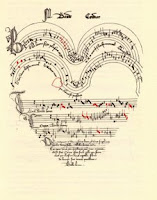 One friend of mine chooses a theme song for each of her main characters and listens to it as she writes each one’s scenes. That seems a really cool idea, but I’ve never tried it. Other friends thrive on the chatter and clatter of coffeeshops.

My own soundtrack varies with my mood and what I’m writing. Sometimes, I need silence to get the focus I need, particularly with nonfiction. Often, I choose Baroque or Renaissance instrumental. If I do choose music with singing, I’ll pick something that’s not in English. Otherwise, the words in my ear interfere with the words in my brain and fingers. If I'm doing background research rather than actually typing words, I listen to many kinds of music: early music (music of the Baroque era and earlier), folk, blues, Cajun music, Zydeco, gospel, Celtic, R&B, bluegrass, New Age.

Although I have a large CD collection, I tend to be lazy and tune in a station on iTunes or Live365 so that I don’t have to make choices or get up to change the CD. If you’ve never heard of Live365, it’s an Internet site with thousands of stations in every genre—and even subgenre—imaginable. For example, I have several early music stations among my fifty-one presets, including a station that plays only European sacred music of 1400–1600, a station that plays only Gregorian chant, and a station that features archguitar, lute, and theorbo music.

What is your soundtrack when you write, and why?

Posted by Shauna Roberts at 6:25 PM

Unless I'm in the flow, or having a log jamb, I need absolute silence. When I'm stuck, I need classical or Celtic (always wordless), and if I'm in the flow? Anything goes!

I've actually tried Baroque and Renaissance but found that it's too plinky (technical term), and makes my mind focus on the music itself. So, it's more or less the same as listening to something with words.

I think my favorite Live365 station for writing is Basson- it's mostly incredibly mellow, even if it occasionally sounds like flatulence. I'm going to have to spring for the Pro version, since the commercials always break in at the worst moments.

As for cafes? I do my best thinking there. My husband valiantly refrains from calling my cell since he knows I'm working (unlike when I'm at home, when showing me a not-even-amusing email is more important), and other people are only a distraction when I want them to be.

I haven't gotten to the point of needing specific music for specific parts, but music has inspired stories for me.

Thanks for dropping by, WORD VIXEN. It really surprises me how many people, like you, find cafés conducive to writing. I'm not comfortable unless I have my own stuff around me. Of course, one of the benefits of a café is that there's no stuff to distract you.

If I listen to music when I write, I'm like you -- it can't have lyrics, at least not in English. I think my favorite pieces to listen to are Bach's suites for unaccompanied cello. Something about the cello really does something to me.

I do not listen to music when I write. It distracts me and I start tuning in to the music and not my characters. Your comment about your friend choosing a theme song for each character is very interesting. It it amazing how every writer's process is different.

Thanks for the link to that live 365. I'm checking it out. I think I might like listening to just music without any lyrics in it while I write.

LISA, the cello is rather like the bassoon, WORDVIXEN's choice, in that it's got a deep, rich voice and is played with vibrato. They're instruments you "hear" inside your chest as well as with your ears. I find them comforting to listen to—perhaps a reminder of being in the womb and feeling the heartbeat all around.

RAE ANN, I agree. Writers have a lot of things in common, but work styles is not one of them.

CHARLES, I think you'll enjoy Live365. With such a huge selection, one can find just the right background music for whatever task one is doing.

It's a toss up for me, and generally depends on my mood and what I'm writing. Most often, it's the coffee shop setting that works. I call it my "place of business". However, depending on the number of people, or the type of music playing in the background, sometimes the coffee shop doesn't work for me. A few weeks ago, I found myself working at a local library (unfortunately, it was almost as loud as the coffee shop).

As for music, the background chatter, grind of the coffee machine, and subtle (hopefully instrumental) music works best. But, that's not always the case, either. When I was working on my Christmas novella, listening to Christmas music helped to put me in the mood. In a few scenes when there were heated exchanges between the hero and heroine, a fast piece of piano music did the trick.

Very interesting question, and I'm always interested in others' answers.

I don't play music, not necessarily because of possible distraction, but because I must be able to hear in case a certain someone has collapsed on the kitchen floor.

No music, no people, nothing. I have to be absolutely alone to concentrate and to disappear in the world I'm creating.

That can create problems though. I will never forget the day, mug of coffee in my hand, looking over the screen what I had written so far, deep in thought. The sudden opening of the letterbox followed by the clatter of post sent my mug flying! The cleaning of the keyboard seemed to take ages.

I can paint to music, but don't write to it...will usually turn off any sound source in the house if I have the choice - or tune it out mentally if not.

I only listened to music when writing for Orange Mint and Honey because music played such a large role in the story.

As for the other things--tools and place and such, I'm so not picky. I've written well at the kitchen table at my laptop by candlelight and on a walk jotting notes in a tiny notepad.

I generally don't write to music, though on Sunday nights I usually listen to the folk program "Acousticity" on WGLT Radio while writing. It's more of a hindrance than a help, though I've been introduced to songs that I'd like to use in a novel or story.

I used Mendelssohn's "Scottish" Symphony as a theme for a love scene in the novel I'm working on. (My heroine is half-Scottish and half Parsi, so she and the protagonist make love to the Scottish Symphony, conducted by Zubin Mehta, a Parsi.) I had to listen to it several times to make sure it worked. But I couldn't write while listening--the Romantic symphonies demand one's attention.

I need silence to concentrate, so don't listen to music unless I'm working on something that doesn't require me to get into flow state or to think hard. When I do listen to music, I like Vivaldi, Bach, Mozart, Baroque music, and some New Age music. It must be instrumental; vocals, whatever language they're in, distract me too much.

If I were going to write a battle scene, I'd listen to Wagner ahead of time to get me in the mood, a la Robert Duvall's character in APOCALYPSE NOW. That scene is one of the most chilling, yet thrilling, of any film. One watches in horror yet fascination, as the Hueys sweep in over the Vietnamese village and strafe it to the booming chords of "Ride of the Valkyries."

Sorry to have gotten so far behind in answering the people who were kind enough to post on my blog this week.

FARRAH, I can see how Christmas music would help with a Christmas story. I think that would would work for me, too.

BERNITA, Yes, I can see that. Hopefully that doesn't happen often.

MIDDLE DITCH, at least you were able to get your keyboard clean and working again! That spilled coffee could have fried it.

JULIE, interesting that your soundtrack varies with whether you are painting or writing.

CARLEEN, it sounds as if music played a similar role for OMAH as it did for Farrah's Christmas story. Because it was related, it enhanced the writing instead of distracting.

STEVE, when I lived in New Orleans and had some good radio stations available, I would also listen to my favorite radio programs even if I were writing.

SPHINX INK, I haven't seen Apocalypse Now, but that sounds like an unusually effective use of music in a movie.

When I write my blog (which doesn't count, to me,) I use the soundtrack of my own thoughts.
However, when I'm painting I sometimes use mood music than matches what I'm working on. More often, however, I seem to watch TV (sometimes I need to pause just for a few minutes to let things dry & it's just not enough time to get into anything else.)

LANA, when I write my blog posts, I listen to all different kinds of music. But I don't watch much TV in general and loathe it as background noise for any activity.

I don't let what's playing or not (including the TV) derail my writing, but I *do* slant my iPod heavily toward my main character's taste in music during those writing-months. Poison Door, I listened to a lot of punk and metal. Dark Road Blues, lot of country and blues.

Now that I'm between books for the moment, I pretty much just stare at the wall.... :)

I'd never heard of Live365, Shauna. I'll have to try it--when and if my office computer ever gets back on line. At the moment I can only connect via my old one on the dining room table, a real pain.

Thanks for the link to the live365! I am one of those writers that thrive on silence. I don't get as much of the quiet as I need, so sometimes I go out to the place where my father is buried. Sounds odd, but from up there, on the hill, I can see all of San Bernardino and surrounding areas. I watch the birds and squirrels, with my writer's journal and a pen close by. Sometimes I need this lapse in city noise to just think nothing. To clear up. Wish I could haul my computer up there, ergo the journal that will never lose my words, nor do I need to back them up. Guess you'd call me old-fashioned.