This week marks the first anniversary—and 55th post—of “For Love of Words.”

The first post appeared 11 April 2007. That post announced that I had had a novelette published in the magazine Continuum Science Fiction, and, more exciting, my name was above Greg Benford’s on the cover! Coincidentally, I met Greg Benford in person this past weekend at a literary conference (more on the Literary Orange conference next week). Two faithful friends commented on the post, Sphinx Ink and Farrah Rochon. Thank you for sticking with me for the year since.

Other posts in April 2007 included a discussion on 12 April about the value of a reading list, a commentary on 19 April on the science fiction novel The Carpet Makers, a post on 26 April about properly punctuating dates, and a rant on 30 April about FEMA refusing aid for New Orleans offered by foreign countries. Although my blog description promises rants, I think that may have been the only one so far. 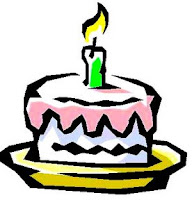 Thank you all for visiting, and a special thanks to those who also commented. Some of you have become good friends during the year, and I hope to get to know the rest of you better over the coming year.

Congratulations. It must be quite a pleasure to track the evolution of a blog back through the full cycle of a year and remember significant 'markers' posts. The thoughtful interviews stand out for me, but also some of the inbetween posts and fillers, especially the memorial for your father.

All the very best as it FLOW's on into the future.

Thanks, JULIE and CARLEEN. Part of the pleasure of doing this blog has been getting to know both of you.

Congrats Shauna, and congrats for being a winner on Charles' blog. Hip hip hurray!

Shauna--I've just started reading your blog regularly, after discovering it through either razored zen or Eudaemonia. I appreciate your grammar posts--I'm glad you're not discontinuing them.

Congratulations on your first year of blogging.

Thanks, MONIQUE and STEVE. I'm glad you dropped by.

I'm glad you've become a regular, STEVE, and also glad to know you like the grammar posts.

P.S. MONIQUE and everyone else: Having won the Pass It Forward contests on Charles' and Angie's blogs, I'll be having my own, with four winners. Come back next week for a chance to win some books.

Happy anniversary and I hope there are many more. I've always appreciated the grammar posts too, despite the fact that usually I'm wondering if I prompted them! :)

No, LISA, you have never inspired a grammar blog post! I've done copyediting and proofreading off and on for 19 years, and that provides more than enough fodder for grammar posts past and future.

Kudos to you, Shauna, especially for getting in 55 posts--averaging more than one per week. That's much better than I've done. I've really enjoyed your blog -- I like the grammar posts, too! And I appreciate your use of photos on a regular basis.

Happy blog anniversary day. I should have gone back and read your older posts. This is the first I'd heard of the Continuum publication. I'll have to seek it out.

Shauna:
Congratulations on one year of blogging. Thank you for some wonderful, informative posts. A BIG thank you for encouraging me to blog and being available to answer questions. I look forward to another year of great posts from your blog.

Thank you, SPHINX INK, for not only sticking with me for a year but also for all the good advice you gave me on getting started and making friends in the blogosphere.

CHARLES, Continuum has not put out an issue since a year ago, when my story came out. However, the editor told me recently that he will be putting another issue out soon. So he seems to be cranking up again after a lot of family issues.

Thanks, RAE ANN. I'm glad you enjoyed my first year.

Happy belated birthday. Your blog ranks as one of the most interesting on the web (at least in my mind). It makes me think.

Here's to many more years of wonderful musings.

Happy Blogiversary!! (I love the way blogging has put new words, accepted or not,into our vocabulary)

I've enjoyed your posts in the short time since I came across our blog. :~D

Shauna -- I just discovered your site and it's a total delight -- it's rich, fascinating, helpful, and beautifully written. I spent almost an hour on it, and you're on my permanent bookmark list.

FARRAH, thanks for supporting my blogging for the past year and posting even when few other people had found me yet.

TIM, a huge thank you! Posts like yours make the time spent blogging worthwhile. Thanks for visiting and making me part of your regular reading.

Congratulations on your year of blogging! As I mentioned to you, I love your interviews, and I apparently contribute to those higher numbers. :-)

Congratulations on the anniversary! May you have many more. :)

Thanks for delurking, MICHELE. I'm glad you've enjoyed my interviews. It was good to meet you on Saturday.

Thanks, LANA and TRAVIS.

Shauna, Your site has made for many hours of reading! Happy One year Anniversary of Bloggation! (huh?)
Yep, just made that one up. You are on my bookmarks also and I love your site. We are very close not only in name, but in area, and I welcome you to the beautiful Inland Empire!!!