A couple of people suggested that I blog about my late father, Edward Arthur Roberts (1930–2008). But how can one summarize a life in a short blog entry? I decided to do the Seven Facts Meme again (I cheated—there are eight facts below), this time about him. 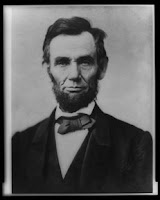 1. Abraham Lincoln was Dad's hero, and I think Dad would have been pleased that he died on Lincoln's 199th birthday. Dad read every book he could find on Lincoln and visited the Lincoln birthplace and other historical sites linked to Lincoln. He also visited every major Civil War battlefield and many of the minor sites.

2. Dad met my mother in second grade. They lived around the corner from each other. However, they did not start dating until after high school. Dad’s father (a minister) married them in Mom’s parents’ living room (below left), and they were married for 48 years before my mother died in 2000. 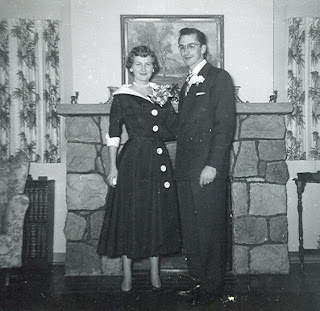 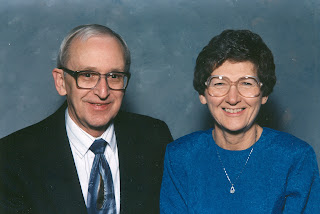 3. In his youth, Dad traveled from Ohio to California and back by hitchhiking and riding the rails. When he got home, the only money left in his pocket was a nickel and a penny, which we still have today in one of his scrapbooks.

4. Dad ran track in high school and won many ribbons. He later transferred his sports allegiance to the Ohio State University football team and converted his second wife, Eila, into a scarlet-and-grey–wearing Buckeyes fan. Even Eila’s miniature poodle, Cricket, had a Buckeye tee-shirt.

Dad was thrilled to be photographed with Brutus the Buckeye mascot when Ohio State played in the Sugar Bowl and displayed the picture (below at right) prominently. 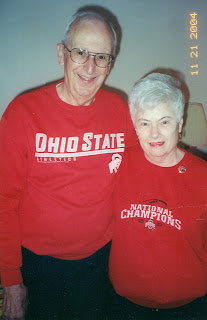 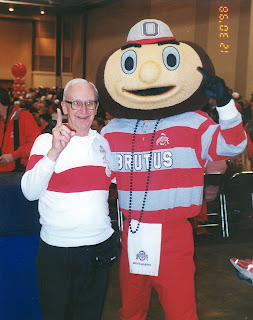 5. Dad had determination, an independent spirit, a strong sense of honor, and a low threshold for being told what to do. After dropping out of college, he worked as a reporter for the Dayton Daily News briefly, but then became a cab driver. He thought driving a cab was a wonderful job because he was his own boss, but Mom thought it too dangerous and Grandpa thought it unsuitable for a minister’s son. 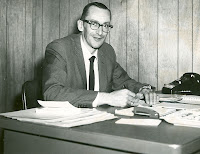 Dad switched to selling insurance and did that for more than forty years, winning many awards. He loved being self-employed and got up each morning eager to go to work. (That caused me a rude awakening when I got my first job: I quickly discovered that if you’re not self-employed, going to work is something you dread.) He impressed his business ethics on all of us kids: Work hard, tell the truth, deal honestly with your clients and suppliers, be loyal, and keep your promises. These principles have served me well in running my own business.

After he retired, Dad wanted to do volunteer work but did not want a boss hovering over him, so he took courier positions, driving mail and supplies around for various organizations. 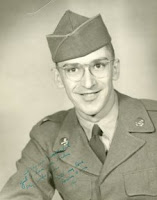 6. When he was drafted into the Army, Dad was appointed Company Clerk because he was the only one in his unit who knew how to type. He was not cut out for Army life, with its arbitrary and illogical rules and regulations and orders—and had two court martials* to prove it. Despite those experiences, he was proud to have served his country and was patriotic to the point of refusing to buy a foreign car.

(*28 February 2008. One of my brothers suggested that I explain the court martials so that you do not get a low opinion of our dad. In one case, he reported his commanding officer for frequently being drunk on duty. The other men did not back his story up at first, probably for fear of reprisals, and Dad was court martialed. Later, his fellow soldiers confirmed his story and the CO was punished. In the other case, Dad got in trouble for being AWOL; we kids each have a different memory of why he needed to be off base without permission, and I will post an answer when we put the facts together.)


7. While stationed in Germany, Dad took up photography as a hobby. He told me that all the other soldier 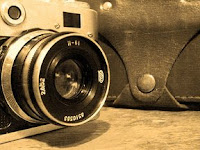 s went out drinking or chasing girls. He didn’t drink, so he wasn’t interested in bars. He was married, so he couldn’t chase girls. To fill his time, he started taking pictures. From that point on, he documented his family and the places they visited, filling a tall pile of slide boxes and more than 40 photo albums by his death. 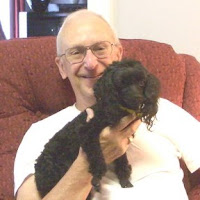 8. Dad was known for his sense of humor and ready laugh. Over and over again, at the viewing, at the funeral, and in sympathy cards, people told me how he brightened their day with his jokes and smiles.

I invite others to continue this meme. I would love to read about your own lost loved ones and what made them special. 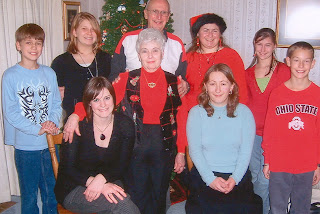 Christmas 2007
Dad and his wife, Eila, surrounded by his seven grandchildren

Posted by Shauna Roberts at 1:32 PM

Thank you Shauna! It sounds like your dad had a life well lived. And he will continue to live on in your memories. Thanks also for the meme suggestion although it may be a while before I get around to writing those posts of some very old memories. It's good to see you back posting. :~)

Shauna, this is such a lovely tribute to someone who could only have been a very special man. As I was reading, I was thinking about what I'd say about my own father, who I lost in late 2004 and voila, you suggested carrying on the meme. Perhaps I will.

This is a wonderful meme. I will continue with this about my dad, probably this weekend. What a nice tribute. He sounds like a wonderful human being and father.

Thank you for sharing your beautiful memories of your father with us.

What a wonderful, moving tribute. Thank you.

Thank you, LEON. It feels good to be posting again as I ease back into normal life. I'm glad you stopped by.

Thanks, LISA, CHARLES, RAE ANN, and CANDICE, for stopping by.

I looked up to my father a lot (and not just because I'm short) and am glad you all could learn something about him.

At my brother's suggestion, I updated the post to include more information on Dad's court martials. Didn't want anyone thinking he got in trouble for brawling or abusing German townspeople or something else similar.

I very much look forward to hearing about your own fathers, LISA and CHARLES, and maybe LEON too.

Shauna, I have enjoyed hearing about your father's life. I am so sorry I didn't get a chance to meet him. From what you've told, he would have been an interesting person to sit and have a conversation with.

I hope thing do get back to normal soon.

Thanks for sharing your memories of your father. I wish I had known him. You are fortunate to have had him in your life.

Such a lovely man.
He made his children rich in everything that counts.

A lovely tribute to a good & honest man.

Thanks for your good wishes, FARRAH. I suppose life will never really get back to normal. Dad was the one I called when I needed advice about business or finances or when something bad happened. I'll always miss that.

SPHINX INK and BERNITA, yes, we were very lucky.

Good to see you back, Shauna! What a life your father led. That's so cool that you all still have the coins he had in his pocket when he returned home.

I wrote an essay after my mother died about how impossible it is to sum up someone's life. Obviously you couldn't do that, but you gave us a great snapshot of the man who raised you. Thank you for sharing!

A great tribute. I saw your blog over at Charles Gramlich's site. You have a terrific blog!!! It has a wonderful mixture of things all writers would enjoy.

Very touching and earnest post. i enjoyed reading it an learning about your dad. He seemed like a very good man.

Thank you, CARLEEN, SIDNEY, BILLY, and TRAVIS for stopping by.

I'm glad you found my blog, BILLY, and hope you return.

CARLEEN, it's funny, but we always got a kick of looking at that nickel and penny. They had so many different meanings, not least of which is the worrying thought that if his trip had taken one day longer, he'd been pretty hungry by the time he got home.

I put a link to your site on my "chapter and verse" site if that is okay. I'd like to put it on the other, too (although my navbar is giving me trouble there :) Thanks for visiting my blog.

BILLY, putting up a link to my site is not only fine, but appreciated. Thank you. I'll do the same for you next time I update my link list.

Very moving. Thank you for writing this...

I'm glad it touched you, STEVE. Thanks for coming by.

That was very touching. I read Charles' at the weekend and that one also touched me. I envy both of you because I feared my dad.

What a lovely meme. Your Dad's positive spirit really shines through; and thanks for sharing in this way at this time.

MONIQUE, I'm sorry to hear that you missed out on having a loving, kind father. How sad for both of you that he did not appreciate what a gift a child is.