The story behind a story

My science fiction story “The Llama’s Tale” was posted Sunday at Space Westerns’ Web site at http://www.spacewesterns.com/articles/45/. A one-sentence synopsis: Kella is sure she'll be chosen to be a rider for the prestigious Llama Express Service—until the training school pairs her with the aging, scruffy, flatulent, half-deaf llama Buddy.

If you have a moment, I’d be honored if you checked it out. The Space Westerns site charges you nothing to read the postings, and it contains many good cowboy stories set in outer space.

I thought it would be fun, after recent postings about “filling the well” here and at Steve Malley’s Full Throttle or F**k It, to briefly analyze the contributions of my well to this story. 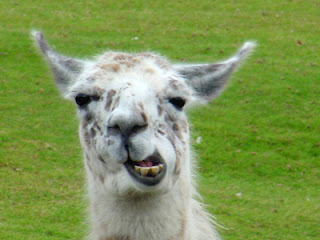 Buddy the llama existed in real life. I did give him a species change (from horse to llama), but otherwise he is the same tired creature my sister, Renee, was assigned to when she took riding lessons.

The comment Kella’s brother Trivvy makes during the show is what my own little brother Vince—now far from little, as he delights in pointing out as he rests his elbow on my head—actually said during the graduation show when Renee finished her riding lessons.

The setting was inspired by the ABC television program “The Young Riders” (about Pony Express riders), which I watched faithfully from 1989 to 1992.

Kella is based partly on my sister. She wore such a horrified look during the horse show that I can still see it ~35 years later.

Kella’s arrogance is based on mine as a teenager. School emphasized book smarts above all other qualities, and I bought it hook, line, and sinker. I thought that because I was smarter than other people, I was also better than them. (As in Kella’s case, life taught me otherwise.)

So how much did I drain my well? Buddy the horse is probably good for only one go-round, and the same for “The Young Riders” as inspiration.

On the other hand, some elements that went into “The Llama’s Tale” did not lower the level of my well. My brothers can still serve as models for little boys in other stories. And despite my efforts at self-improvement, I still can be arrogant and have many other flaws to draw on to flesh out characters; I don’t see that well running dry—not so good for me, but great for my fiction.

I love the picture. Llamas always have a very nonchalant look about them, as if they haven't a care in the world. Will check out the story site later (from home.)

LANA, I wish I could claim credit for the llama picture, but I can't; I found it searching Google Images.

I hope you enjoy my story. Thanks in advance for reading it.

Shauna, that was awesome! Took me back to Heinlein's juvenilles!!

Loved the story! Wasn't sure what the twist was going to be at the end & was delighted by your resolution.
One thing I saw, FYI; "The judges moved to the second horse."

Thanks, LANA! I had a hard time with the ending, so I was glad that you liked it.

Isn't that funny about the horse being in there and no one caught it? I had my sister's horse show in mind as I wrote that, as you might have guessed.

What a great story! I was in love with Buddy from the beginning. I loved that you described him as having "no dignity whatsoever", I loved his wandering right eye and of course who doesn't love a flatulent llama? I had no idea what the resolution would be, but I was very satisfied with it. Bravo!

What a fun story. I like the resolution but I still want to know what she chose. I think I want to see her go to "Pierpont Station." That could be the site of many more adventures.

Steve's right. It does remind a bit of Heinlein, with maybe a touch of Harry Potter. Not in subject matter but in the light tone.

Congrats on this. It's really an excellent story. And Kella is a great character. I also enjoyed your comment on your blog about where the elements came from in the tale and how it affected your "well."

Oddly enough, I just finished a story this weekend that featured "flatulence" as a plot device. Lol.

Congrats on the publication.

Enjoyed this so much; its so distinctive and so fluent.

I had to smile as we have a lama park near us which we visit - http://www.llamapark.co.uk/

Also appreciated the preceding photo article to yours on star trek!
I've changed the name of the blog to virtual voyage for practical reasons.

Good day !.
You re, I guess , probably curious to know how one can reach 2000 per day of income .
There is no initial capital needed You may begin to get income with as small sum of money as 20-100 dollars.

AimTrust is what you haven`t ever dreamt of such a chance to become rich
The company represents an offshore structure with advanced asset management technologies in production and delivery of pipes for oil and gas.

Its head office is in Panama with offices everywhere: In USA, Canada, Cyprus.
Do you want to become a happy investor?
That`s your chance That`s what you wish in the long run!

I`m happy and lucky, I started to take up real money with the help of this company,
and I invite you to do the same. If it gets down to select a proper companion utilizes your savings in a right way - that`s the AimTrust!.
I take now up to 2G every day, and my first investment was 500 dollars only!
It`s easy to start , just click this link http://juvoninocy.dreamstation.com/itumik.html
and go! Let`s take our chance together to get rid of nastiness of the life