When I first started learning the recorder 25 years ago, “Innsbruck, ich muβ dich lassen” by Heinrich Isaac (1450–1517) was among my beginner tunes, and I fell in love with the melody.

As I progressed to playing the four-part version in consort, I learned the sad words and loved them too. “Innsbruck, I must leave you. I must travel streets in foreign lands. My joy is taken from me...I will be in misery.” (If you're interested, you can find a score with words at http://www.hansmons.com/sheetmusic/Isaac%20Innsbruck.pdf.)

Isaac’s great love for the Austrian village awed me and made me sad that I had never felt that way about anywhere that I had lived.

Now I have found a town worthy of such love, and now I too must leave it.

In September, we are moving from lush and beautiful New Orleans to the mountainous desert of southern California—a foreign land indeed. The landscape there has its own beauty, a raw exhibit of the power of tectonic plates that fold and tear rock into jagged peaks and strew boulders about like beads at a Mardi Gras parade.

Still, I will miss nearly everything about New Orleans (the bugs, potholes, and stifling humidity excepted), the first place I’ve ever felt I truly belonged.

I once bought an old book of photographs of Innsbruck at a garage sale. Published before the Allies bombed most of Innsbruck into nothingness in World War II, the book showed the medieval village at the foot of the Alps had changed little over the centuries since Isaac's time.

I no longer have that book. When the federal levees failed two years ago after Hurricane Katrina, the flood destroyed it. Is there another copy left anywhere in the world? If not, Innsbruck of old exists now only in the memory of the eldest of elderly people. 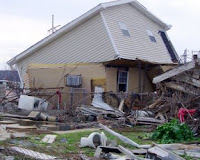 New Orleans has risen from the ashes (literally, in two cases) several times, and it will rise again from the “Federal Flood.” Unlike Innsbruck, plenty of photographs of New Orleans before the flood survive; its beauty won’t be forgotten.

But the essence of New Orleans was more than its beauty. It was walking out of my house and seeing a cart pulled by a horse; buying produce at a corner stand; going to lunch and seeing a horse-drawn hearse pass by with a second line dancing behind it; having birds singing so loud outside my office window that my clients could hear them over the phone; smelling flowers everywhere in spring. One day, like the elderly Innsbruckians, I will be among the last people who remember what New Orleans lost when the federal flood walls gave way, not least of which was our innocence. And I’ll be remembering it from a foreign land.
Posted by Shauna Roberts at 10:23 PM

Thank you for putting into words the reasons why I've always loved being a New Orleanian. I feel blessed to have had the opportunity to become your friend and to appreciate my city through new eyes. I will send you new kinds of birds to trill outside your window every morning.

You've found the soul of our city. You may be departing from New Orleans, but New Orleans will always be a part of you.

I assure you, the city of New Orleans will miss you, just as much as you will miss it. You understand what it means to be a New Orleanian more than many life-long residents.

Like Roz, I am blessed to have to have your friendship.

I'll go sit in a corner and cry as I try to come to terms with your eventual departure.

Shauna, I am sorry to see you go, but happy that the internet extends even to Southern California so all your friends here can continue to check in on your life through your blog. I do hope you're planning on keeping it up. You'll have to share more pictures with us and keep us informed as you settle in. I can read in your words how much you'll miss this area, but there will be some new beauty to love.

We'll miss you. But see you here and in our minds.

Thank you, Shauna, for the beautiful essay, not only on the joys of New Orleans, but on the nostalgia of loved places. I'm glad to have gotten to know you. I bless the Internet, which will make it easier for us to stay in touch after you move. And, as different as the desertscape of Southern California is from the green lushness of South Louisiana, you will grow to love SoCal's unique beauty, too...although you're not likely to find a horse-drawn cart selling Roman candy going by your house in Riverside!

ROZ and FARRAH, I am going to miss you and the rest of our critique group so much. You are both part of what made New Orleans wonderful for me.

CHARLES, yes, I do plan to keep blogging and will keep reading your blog as well. I suspect my posts will be irregular until we get settled in a little--although perhaps I could just post more pictures of my new neighborhood if I don't have time to write.

SPHINX INK, thank you for your comments. I'm sure you're right. Just during the 10 days we spent there buying a house, the landscape changed from an alien moonscape to an intriguing environment begging to be explored. (Need to get some hiking boots first, though.) I'll miss you, but I'm happy to know we can keep in touch by blog and email.

This post is just beautiful and even though I've never met you in person, I think I'll miss thinking of you in New Orleans, if that makes any sense.

Stop making me cry, Shauna.
I think New Orleans has to be a state of mind as much as a place, at least I hope so. Every day I see more of this place returning, but when I do, I often realize that what has returned was something I forgot had existed here. So your list of pre-K recollections gave me pause. Just remember that, although the birds are still returning and so are the flowers, my new roses are growing, and roses do well in Southern California too, you know.
MN

Shauna: I know what you mean. I was born and raised in NO and could not imagine living anywhere else (although I do live in the suburb of Metairie). It is the spirit, ambiance, and soul of the city which gets to you. It will arise again. We will miss you and hope that you will get back on visits to see us all.

Thank you, STEVE, LISA, MARGARET, and BRENDA, for stopping by and leaving your comments. I think we'll enjoy living in California. But there's no place like New Orleans and no people like New Orleanians. And since Katrina, one shares a sense of camaraderie with every person one passes on the street. Either the other person is another Katrina survivor, or someone come down to help rebuild, or a tourist spending money the city badly needs. I'll miss that feeling of being connected with everyone.

Lovely post. I miss every place I've ever lived and left, although I must admit some tug at my heart more than others. The thought of leaving New Orleans some day really hurts. Yet, here's to your new adventure.

Thanks, CANDICE. I've lived some places that I couldn't wait to get out of (Iowa, for example), which makes New Orleans is even more special to me. At least I can come back and visit, and I can see some of my SOLA friends at the RWA meeting in San Francisco next year.