Last week, on 29 August 2007, New Orleanians commemorated the second anniversary of the failure of the federal levees that left 80% of New Orleans under water and more than 1500 people here dead. It was perhaps the greatest manmade disaster in American history.

The only bright spot of the catastrophe was the revelation of the generosity of individual Americans and people from other countries. More than a million Americans came here as part of formal groups to help us recover. Many, many other people helped in the rescue effort; contributed money; housed and fed homeless relatives, friends, and complete strangers; and helped in many other ways. Our government may have abandoned us, but ordinary Americans and people from other countries rushed in to help.

New Orleans was battered but not beaten. Today I'm proud to post a few photographs that show the spirit of New Orleanians, who faced disaster with humor and determination. (First image copyright 2005 Vince Roberts; all other images copyright 2006 Shauna Roberts.)

Zip code 70125 was still officially closed to residents when this picture was taken, but that didn't stop us or our neighbors from going into the city to start the first step of rebuilding: throwing out ruined refrigerators and other trash. 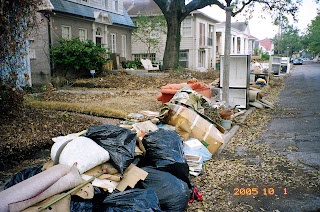 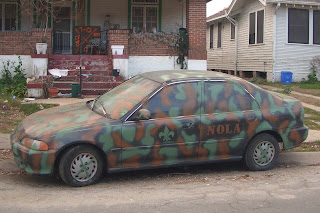 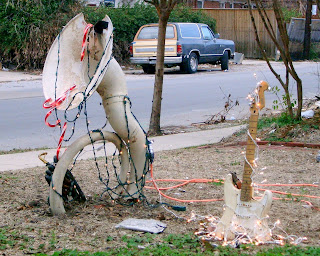 Funny—no takers for this generous offer 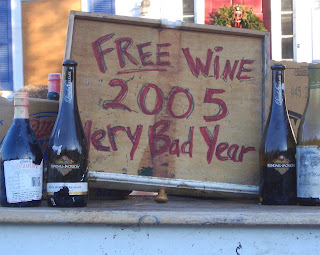 No street signs, no problem; people made their own 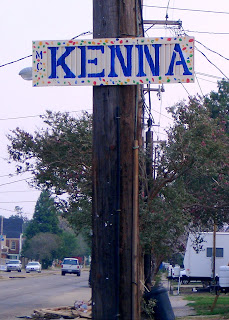 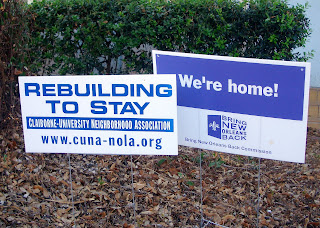 Despite all their hardships, people still found the time to make elaborate costumes and take part in parades, throwing beads and toys to the eager crowds. 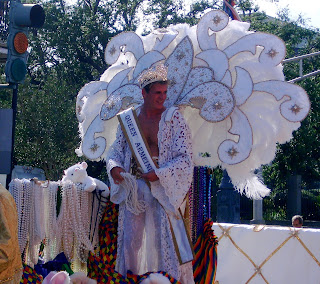 Fare thee well, New Orleans. I may not blog for a couple of weeks because of our move to California. See you then from the other side of the Rockies!

Posted by Shauna Roberts at 6:23 PM

Thanks, NESTABOB, for stopping by. I plan to learn Spanish when I get to California, so then I'll be able to read your blog.

These photos are fantastic and this is a poignant farewell to a city I know you love. I'll miss thinking of you in the Big Easy, but look forward to seeing you back on line once you're on this side of the Mississippi.

Hey, my husband's family was from there. Did you hear of a Susanne Byars, who was a fairly noted psych nurse down there? (She's now out here w/us due to health & Katrina.) She's my mother-in-law.

Saw you like Zuni fettishes. I grew up in Gallup, NM & we now own land near Ramah. The Zunis are some of the finest artisans amongst the Indian nations.

Great pics. And yes to all the family and friends who so generously helped us. And although the Government was not often on the ball, the Red Cross did some yeomen work and are much appreciated. They sure helped Lana and I.

Hurts my heart every time I see pictures like this. Thank God people have been able to maintain some humor and joy still.

Thanks, Shauna, for the great pix. You have been a wonderful adopted New Orleanian, because you understand the heart and soul of this city, and you have suffered with us, for us, and among us. I hope the move to California goes well. I'll miss you! But I look forward to keeping in touch via e-mail and blogging. Keep the faith!

Oh, and good luck with your writing. I hope to be seeing "by Shauna Roberts" on the shelves of bookstores one day.

C. MARIE, no, I don't think I know Susanne Byars. Thanks for taking her in. We are all so grateful for people like you.

Now that I'm going to be in the West, I'm hoping to visit the Zuni reservation and see the artists at work.

LISA, as sad as it is to leave New Orleans, we're looking forward to exploring all the new natural and human environments in California.

CHARLES, the Red Cross was even active in my neighborhood, which only flooded four feet. They were so nice; they'd drive around everyday and pass out meals and water to residents and their workers. They didn't like to be turned down, either! They really wanted to make sure everyone was eating.

CARLEEN, I have probably hundreds of pictures of destruction. But the pictures I posted are among the ones I like best, because they show the hope and determination that will bring New Orleans back and that make life enjoyable in the meanwhile. I would love to stay here and watch the rebuilding unfold over the next few years.

Thanks for stopping by, SPHINX INK, and for your good wishes.