A cruel conquerer's grand Assyrian feast, and a contest


One of the most magnificent feasts in history celebrated the completion of the Assyrian palace in Kalhu (also called Nimrud, a city that once lay north of Baghdad) in 879 B.C.E. (before the Christian era).

King Ashurnasirpal II wasted no time upon becoming king of Assyria (part of modern-day  Iraq) in roughly 883 B.C.E. Thirsting for war and riches, he immediately invaded north, east, and west, conquering the people there. The Syrians soon rebelled against his savage rule. His response: Burn the small children to death, and mutilate the grown men. Some had their hands and feet cut off; others lost their ears, noses, and lips.

Content that no one would revolt again, Ashurnasirpal II took his plunder home to Assyria and celebrated by forcing thousands of slaves to build him a luxurious new capital city at Kalhu. When the palace—built from imported luxury woods, limestone, and alabaster—was completed in 879 B.C.E., he held a feast for nearly 70,000 people from several countries that lasted 10 days.

According to Ashurnasirpal's own words,  the supplies he ordered for the banquet included: 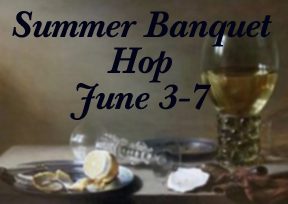 Unfortunately, Ashurnasirpal II failed to succumb to his high-fat, high-cholesterol, low-nutrient diet, either at his feast or later. He lived to crush his neighbors and create wall reliefs depicting these conquests for another 20 years.

Ashurnasirpal II is remembered today for two reasons: his great feast and his great brutality.

This blog post is part of the Summer Banquet Blog Hop, in which 31 authors of historical fiction blog about historical food in the first week of June. The following authors are taking part; click on a name  to see that person's post.

Many of the Summer Blog Hoppers are also offering prizes, including me. To enter to win one of two Kindle or Nook versions of my historical novel Like Mayflies in a Stream, set in ancient Mesopotamia, comment below or like my Facebook author page at https://www.facebook.com/pages/Shauna-Roberts-author/194876117254102?ref=hl. Winners of prizes at all blogs will be announced on 10 June 2013.

Posted by Shauna Roberts at 2:59 AM

I shudder to visualize a feast this vast, that much butchering for one event, and what the poor kitchen staff must have had to endure!

A man of great appetites it would appear. The Donald Trump of his day.

Fascinating! Thanks for sharing (thoroughly enjoying the blog hop - do visit the other participating blogs, some interesting articles!)

ROZ, I can't even imagine the logistics of putting on such an event. Some of the other posts in the blog hop also describe similarly huge and meat-laden feasts. I'm glad I wasn't present as either a guest or a kitchen worker.

HELEN, thanks for dropping by. I've visited some of the others on the blog hop, but will spread them out over a few days. Reading about so many feasts at once got a little overwhelming!

After all that meat, one wishes that the pistachio cones had been lovely waffle cones filled with pistachio gelato! Fascinating post, Shauna (alarmingly huge feast, though!).

70K people all at one banquet. I'm amazed. Thanks for sharing about this incredible feast and for the giveaway opportunity. I love that you write about a place outside of Europe.

We think alike, Shauna, in our approach to "indulgence." Thanks for sharing this information. I had no clue before I read your piece.

"Unfortunately, Ashunarsipal II failed to succumb..." I loved that! In Sweden we actually have a king who did die while feasting, this after having finished off his dinner with three dozen or so of Lenten buns (a baked goods consisting of a sweet wheat bun filled with marzipan and whipped cream)

The sheer quantity of food never fails to amaze me when I read about a feast like this! And some of it is so weird to our modern palates, I have a hard time imagining anyone wanting to eat it ;-)

Wow! What a party! I can't see anyone topping this for a feast. Thanks for the giveaway! denannduvall@gmail.com

Man alive! That was fascinating, and terrifying! I can't imagine trying to amass that much stuff for a feast. I think Noah might have had it easier. LOL!

TINNEY, I found the amount of meat disgusting too. By this time in history, they had good irrigation and good trade routes, so there wasn't much excuse for having so few plants on the menu.

SOPHIA ROSE, one wonders how 70,000 people even fit into the palace. Did they have to stand? Or did everyone eat in the street?

Thanks for stopping by!

REGINA, if you visit some of the other blogs taking part in this blog hop, you'll see a few other feasts almost as disgusting as this one, hard as that is to believe.

ANNA BELFRAGE, your story reminds me of an Englishman who died at a feast because his bladder exploded. Lots of wine was served, and apparently it was rude to go to the privy while the king was still sitting at the banquet.

CORALEE, Mesopotamian food would have rather bland for our tastes. In most of the (few) existing recipes, the meats were stewed with a few seasonings. Presumably some were roasted.

CYN2009, I feel really sorry for the workers who had to clean up afterward.

DENISE, thanks for stopping by. I can't imagine another such a feast either. It boggles the mind.

SHARON LATHON, LOL. And it wasn't just the food that had to be collected. Presumably they needed a lot of new cooking pots and tables and chairs and servants to handle such a dinner. And all this in a country with no wood or mineral resources (except in the lands they conquered).

Obviously not big into vegetarianism then!
Great post,
Grace x

Most plants were hard to grow in Mesopotamia because of the high heat and low rainfall. They did eat lots and lots of dates, though. And they had irrigated fields for growing barley and wheat for beer and bread.

The winners of a Kindle or Nook ebook of Like Mayflies in a Stream are Sophia Rose and Cyn209.

I've already sent emails to both of you. Please let me know if you haven't received yours.