On the nose, off the track

One criticism that is sometimes directed at my stories is that they are too "on the nose." Today, I investigated what that means. 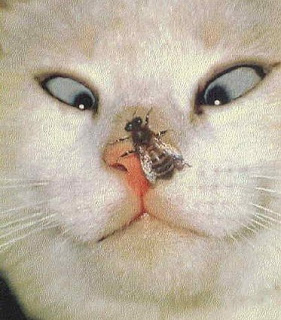 "On the nose," it turns out, is a screenwriting term for dialog in which the person says exactly what she or he means.

I crinkle my brow. I'm from the Midwest, where speaking directly is not just a habit, but a virtue. I've also spent twenty-plus years doing science and medical writing, a field in which one must convey information simply, clearly, and directly. By upbringing and training, I consider "off the nose" a sin.

I consider the kind of people who speak off the nose. Liars. Braggarts. Manipulators. Dumb ones. Inarticulate ones. Passive-aggressive ones. People with things to hide. People with the vice of beating around the bush.

Heroes and heroines with Midwestern virtues are, apparently, boring.

I continue my research and realize there are honorable reasons characters may say one thing and mean another. They're shy. They're confused about how they feel. They're not in a private place. They're exchanging small talk with a stranger. They're not sure how the other person will react to the truth. I start to feel less hostile to characters who speak off the nose.

I also learn that novel writers use the term "on the nose" more broadly to include writing that spells out too much information or too often or writing that places the moral of the story in the dialog. I can get partly on board with this expansion of the definition. It's the old "show, don't tell" rule.

But how much information is too much? Some writers want the reader to struggle with the text and to guess what is happening from vague, ambiguous hints. Not me. I don't enjoy such stories and I don't want to write them. I want my readers to relax and enjoy, without doing anything harder than looking up words in a dictionary or facts on the Internet.

More research. I come across another term: subtext. At last the lightbulb goes on, and I think I grasp the problem—or part of it, anyway—with on-the-nose writing: It lacks layers. The information is all on the surface, with all the dots connected. Too little information is conveyed through characters' body language, choices, and actions and the author's use of literary devices such as irony, symbolism, and metaphor. The rose is just a rose and not simultaneously, as in the Medieval Roman de la Rose, love, a particular woman's name, and female sexuality. Too little room is left for the reader to bring in her own experience and knowledge to enrich the story.

I suspect it won't be easy for me to reduce the on-the-nose writing in my work. Subtlety is not my strong point.

But I will try.

What skill or technique of writing have you struggled to grasp? How did you work it out?

Linda Weaver Clark interviews me at her blog this week. People who post a comment by 7 June will be entered in a drawing to win a copy of my novel of ancient Mesopotamia, Like Mayflies in a Stream. 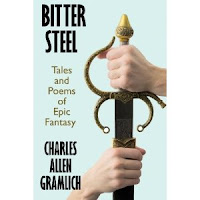 Charles Gramlich—who blogs at Razored Zen and whom I interviewed here in 2007—has a new book out. Bitter Steel: Tales and Poems of Epic Fantasy contains 20 Sword and Sorcery short stories and poems in the tradition of Robert E. Howard. It is available at Amazon.com.

I had a real problem with dialogue when I first started writing, and I still struggle with it. Although I didn't know the term "on the nose," I think that's very much what my issue was. I realized that growing up very much alone for the first six years of my life I never really learned to listen well to what others were saying. It's taken a lot of study to get better. I also don't like stories where everything is hidden and subtle and off the nose. A little bit of that goes a long way for me.

Thanks for the plug on Bitter Steel. Much appreciated.

"Some writers want the reader to struggle with the text and to guess what is happening from vague, ambiguous hints. Not me. I don't enjoy such stories and I don't want to write them. I want my readers to relax and enjoy, without doing anything harder than looking up words in a dictionary or facts on the Internet."


Yeah, me too. And similarly, I struggle with what to give away in dialogue and what to bury in body language and other subtext - how much is too much and how much is too little? I don't think there's a right answer or even a best practice. To some degree, it's just comes down to personal preference - like how much seasoning to put on the food, to quote a friend of mine.

Subtext! That's where my lightbulb went off! I've been trying to use things such as body language and setting to give more insight into what is really going on with my characters, but it isn't easy.

CHARLES, one of my problems with dialogue is that I want my characters to have the kind of in-depth discussions I enjoy having with my friends. I struggle to keep the dialogue bouncing back and forth when a monolog feels more natural.

HEATHER, I ran into the problem of finding the right balance recently when I gave my critique group a much revised version of a story they had first seen seven years ago. The first time they read it, they didn't understand what happened. I added more clues in the revision, and this time they thought I gave way too much information. Yet not everyone came to the same conclusion on what happened at the ending. All I can figure is that I was too on the nose through most of the story and too off the nose at the end.

FARRAH, it's so hard to do that because everyone experiences emotions in different ways, and body language varies from place to place, even within the same state.

Sometimes I run into problems while painting, but fortunately (because I use acrylics,) I can paint over my mistakes almost immediately. That's not to say that some mistakes just don't get fixed. Sometimes there are extenuating circumstances. These are called "learning experiences." <:\

"That your new girl? She's pretty."

"We're just having a drink. You should join us."

"Sure. Another time, then."

"Yeah. She really is very pretty."

Now, obviously these two are in no position to speak plainly to each other. However, even without stage business or imagery or what-have-you, we hopefully get what they really mean.

Some folks reckon that we only *truly* speak the truths of our heart a handful of times. Others believe that we hide our hearts' truths in direct proportion to the hurt we risk.

Fascinating post, Shauna. I was having a similar conversation with a friend this week. He couldn't understand why he was failing his writing course. I told him it was probably because his writing is not layered; it's simply a straightforward narrative of events. No layers, no nuances, no hidden meanings or complications. He's a scientist with no background in literature so he's very impatient with the 'off the nose' approach.

I myself enjoy stories that challenge me with subtexts and I'm trying to develop my writing in that direction.