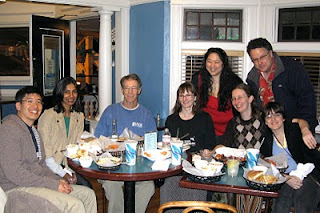 Posted by Shauna Roberts at 7:42 PM

You know (Edward must have mentioned) there are dedicated retreats, where (if you get accepted) you get to spend days or weeks just there, writing...

I'd love to do this with you guys sometime.

I've been on a few faculty retreats but no writing retreats. I really really want to go on one.

I'm hoping that Charles will go on such a retreat while he's off one Summer. He talks a good game, but I don't see a lot of action. Silly person!

I never did thank you for the cc in your travel itinerary of late. Caught me by surprise, but I know that you CARE Shauna, and that showed a lot of caring. Thanks my friend. <3

Each of the retreats you described, has parts to them that were unique, and obviously you took away the best of all 3 to make your idyllic list.

Is there a retreat or teaching days that are geared to help those writing non-fiction? I'm not finding much support in the Memoir department; save for four books I have on the subject. I'd like a voice, hear inflection, from my teachers.

Let me know or maybe I'll email ya with questions and get one of my favorite authors to look things over!!

Keep it up girlfriend, and please take care of that precious body of yours.

KEN, I know I've heard Edward talk about those retreats, but I never realized one could spend just a few days there. That would be a great thing for the Clarionites to do as a group. I'll keep that in mind for myself, too, and see whether I can find something within driving distance.

CHARLES and LANA, it sounds as if both of you want Charles out of the house. Charles, have you thought of asking to borrow Candace's lake house for a weekend or week? That would work well for a solo retreat or maybe for a few people. (I'm not sure how many bedrooms it has.) SOLA is having a writing retreat at Nottoway Plantation on 13 and 14 August: http://solawriters.org/2010/03/22/writers-retreat-at-nottoway-plantation/. It's not cheap, unfortunately, but it would provide a lot of writers to interact with.

SHAUNA (the one who's not me), I don't know of any nonfiction groups in town, but then, I don't know any other writers in Riverside. I'd be glad to look over some of your stuff, if you like. By the way, would you or any of your friends be interested in a goal group—a group that would get together perhaps a couple of times a month for each person to set goals and to compare progress on the goals set at the previous meeting? The person I learned about goal groups from said they can have people with all kinds of goals, not just writing goals—for example, losing weight.