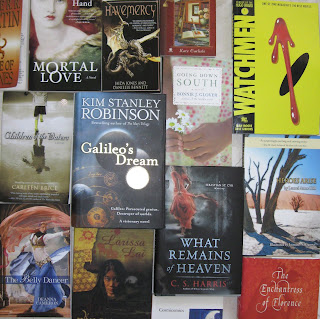 This year I started reading autobiographical graphic novels, which I previously had no interest in. STITCHES: A MEMOIR by David Small left me shaken and surprised that a bunch of pictures could have that strong of an emotional effect on me.

If there was a distinguishing characteristic about my 2009 reads, I'd say it was the year of the doorstop. I read far fewer new releases and far more older books that I've always meant to read -- as it turns out, some of them were long, difficult books. Like you, I read fewer titles. Happy New Year!

I started keeping a separate shelves for books by folks I know a few years back. It's grown by leaps and bounds, faster than any other shelf.

My Books Read in 2009 list included a few non-fiction books this year, something new for me. It's interesting how our reading lists show the different directions our writing takes.

NINTH MUSE, did you read the graphic novel about Katrina yet? We have it but I haven't gotten to it yet.

LANA, I think I would wither away and die on four books a year. Forty seven felt too lean a diet.

LISA, happy new year to you, too! The problem with keeping a spread sheet is that I like long, meaty books, but I sometimes find myself choosing short books from my shelves to up my book count. Perhaps I should give myself double points for doorstop books—that might help!

CHARLES, isn't it exciting to have such solid evidence of one's friends' growing success?

RAE ANN, I didn't realize you weren't a nonfiction fan. Were the nonfiction books you read in 2009 background reading for your WIP?

47 is mighty impressive. I wonder how many words that equates to?

You're so amazing. I'm hopeless at keeping track of such things (though that's why I've started to blog about what's in the read pile and what I've read recently -> if only to put pressure on the to read pile).

I find I can't read as fast as I once did. I think it has to do with a shortening attention span or an increasing number of distractions. I track my reading in a spiral notebook. The cover's held on by duct tape now. Guess I should be higher tech.

'09 wasn't real great for either, readingwise. I don't track the numbers, but I do know that my available time went right down, then got filled up with useful crap-- that's right, Mafia Wars, I'm looking at you!