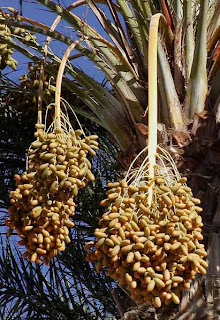 In March, I blogged about the many ways the resource-poor Sumerians used reeds. Date palms (Phoenix dactylifera), too, were put to many uses.

•Dates were eaten as food. Fresh dates are a good source of vitamin C, and dried dates are high in fiber. Both are high in iron and other minerals as well as in sugar and calories—a bad feature today, when most Westerners are overweight, but a good feature at a time when people worked hard and needed high-energy foods. Because dates can be dried and preserved, they could be a source of food in the blistering heat of the Mesopotamian summer when little grew.

•Dates were given as offerings to the gods.

•Date trees gave shade, a rare luxury in the desert. 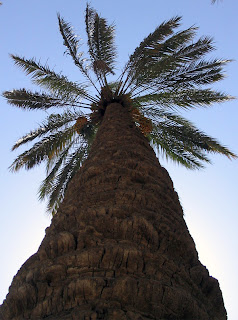 •Date trees were appreciated for their beauty, also rare in the stark desert.

•Palm wood was used for construction.

•Palm wood could be used as fuel.

•The fronds could be woven into baskets and mats and made into rope and brushes.

•Dates could be traded to other countries for basic necessities Mesopotamia lacked, such as copper, tin, wood, and stone.

•Dried dates made travel through the desert easier because they were a light but calorie-dense food that didn’t spoil in hot weather.

Posted by Shauna Roberts at 6:30 PM

There's a short story in this, yes? Go write it.

My grandma used to make date pudding but I never could eat the stuff.

KEN, this post came out of the research for my book about ancient Mesopotamia, so I've used some of the information already. But you're right; this could be the basis of a short story itself.

TRAVIS, I'm not a fan of dates either. I've never had them in pudding, but I suppose it's something like the figgy pudding in "We Wish You A Merry Christmas."

An older relative used to always make date nut bread around Christmas time. Spread some cream cheese on it and -- voila! A little slice of holiday heaven. I haven't had date nut bread in over 30 years, I'll bet.

Imagine how much work folks in the old days could have gotten done on OUR high calorie foods.

I had no idea dates were so useful! Research is a reward unto itself, at times, isn't it?

Shauna,
Thanks for sharing such a wonderful post. If not from your photo, I have no much of idea about it except eating it. It remind me of coconut tree in this region. Its usefulness may be on par or more than dates - from its tree, fruit, leaves, branches, coconut shelf etc... are useful.

You are real creative writer.

Grace and peace to you.

LISA, I've probably got some date nut bread recipes if you'd like me to send you some. I like date bread better than plain dates, but I'm still not a fan.

LANA, if only they came in chocolate flavor.

SCOTT, sometimes research is TOO much of a reward. I find myself wandering the Web following up each tantalizing fact for far too long.

JAMES, thanks for visiting. Excellent comparison with the coconut tree—it's amazing how many societies have a certain central plant that serves many uses. Corn filled that niche in the Americas, rice in portions of Asia, etc.

I'm a big fan of eating dates and figs, stemming from childhood. Of course, they are best eaten in small amounts. Your research also fits into some of my storytelling.

I think my only experience with this variety of date is in fruit cake. Very interesting info. I'm sure the shade provided by the tree was especially welcome in the desert.