Equality and justice for all 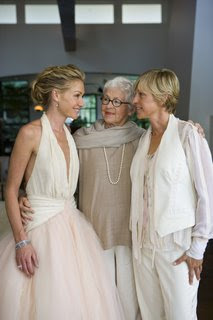 I rarely mention politics on my blog. But tonight, with the polls so close on Proposition 8, I feel compelled to urge my California readers to vote "no" tomorrow on Prop 8.

The proponents of Prop 8 hope tomorrow to take an important constitutional right away from some Californians—the right to marry the person you love and want to spend the rest of your life with.

If tomorrow homosexuals lose rights and become second-class citizens, who will be next? Lefthanders? Like homosexuals, we are this way because of a biological predisposition, not by choice. Black people? Pigmentation, or lack thereof, is not a "lifestyle choice" either. Women? Not my choice either. The equipment was there when I was born.

Think my examples are extreme? It's happened before. Black people in many parts of the country lost rights during Reconstruction that they did not get back until during my lifetime and probably yours as well. The rights of Americans of Japanese ancestry were taken away during World War II—still within the lifetime of some of my readers. The rights of the prisoners at Guantanamo Bay were abrogated by our current president.

I believe no American should be a second-class citizen.

Do it for Ellen, who has entertained you for years with her comedy.

Do it for your relatives, friends, and neighbors who are homosexual.

Do it for my relatives, friends, and neighbors who are homosexual.

Do it for your children to teach them that all Americans are first-class citizens and to ensure they can marry the person they love when they grow up.

Protect your rights by protecting the rights of others. Vote "no" on Prop 8.

Good for you for speaking out on this. If I lived in California, I'd be voting NO too. I find this ballot initiative to be a particularly cruel attempt to oppress a large group of people who only want what all heterosexuals feel is their right. A yes vote is a message to the gay population that they are undeserving of, ironically, the choice to form a family and make a permanent commitment.

I live the Niemoller quote. It pretty much says it all. Thanks, Shauna, for putting this up.

My vote would be no if I was in CA. My vote was no here in Virginia when we had an amendment on the ballot banning same-sex marriage. Unfortunately, that one passed. VA is not friendly to same-sex unions even though I know many who live here.

Good Luck in CA. I hope it fails, for all of us.

I hope your side comes out on top in this. I'll never understand why anyone is bothered by a gay couple marrying. Why can't people let others live their lives as they best see fit? It's just bizarre to me.

Ah, my poor, benighted birth country. Every time I think they've made a step up into the light of reason, some reactionary jackass tries to pull America back into the dark.

I truly do hope y'all defeat this latest attempt...

It's scary how Rove and Bush poisoned people's minds with their "family values/evangelical get-out-the-vote" campaigns in '00 and'04. We have a chance for real change tonight, but McCain has come along and spread intolerance in his campaign. I thought we had learned in the sixties that people are people, but I fear we have such a long way to go. After so many years of the struggle for human rights of all kinds, we are more polarized than ever after the last eight years. Good post.

LISA, yes, it seems bizarre to me too that the very people who are so rah-rah about family values are fighting to stop people from forming stable families.

You're welcome, RICK. I first heard the Niemoller quote when I was a teenager and it has always stuck with me.

VIRGINIA LADY, thanks for dropping by with encouragingn words.

CHARLES, I agree. With so many problems in the world today, you'd think people could find something more worth working against than love.

STEVE, maybe when the elections end tonight, we'll have at least moved into a phase of hope and progress for the country as a whole.

BILLY, thanks for your thoughtful comments. I wish the people promoting "family values" would actually develop some.

I hope the initiative loses. I'm beginning to think government should get out of the marriage business--civil unions for all couples, gay and straight--and let marriage be strictly a religious ceremony.

The high-speed rail initiative hasn't received the same press as Prop 8. I hope that one wins.

A good & worthwhile post. I hope your words are heeded.

STEVE, I voted for high-speed rail. The vote count currently has that favored to win.

LANA, thank you. Unfortunately, the Prop 8 supporters are already celebrating victory. The votes aren't all counted yet, but "yes" votes are in the lead, 52% to 48%.

I, too, was dissappointed to see this proposition failed.

Thanks Shauna. Unfortunately Yes on 8 carried the day with a small majority. Only in California, apparently, can the vote of a simple majority amend the constitution to deprive the rights of minorities. The courts will have to make the final decision and it could take years but this decision will be overturned.

I agree with Steve Wylder (and actually I've thought this for a long time) that the government ought to deal with civil unions. I'm pretty sure one of the reasons, or at least excuses for people to get so up in arms about homosexuals being allowed to get married is because "marriage" traditionally has such a religious association. Let churches "marry" people and let the government apply equal civil rights to everyone.

If you don't hurry up and write another thoughtful posting, I'm reporting you. To somebody...

FARRAH, it surprised me that false advertising could sway such a large percentage of people to change their minds and vote "yes." At first, the proposition seemed a shoe-in to fail.

LEON, from your mouth to God's ear.

LISA, your and Steve W.'s idea would solve a lot of the problems. The one remaining would be religious homosexuals who want a church wedding, although I suspect many churches would perform such ceremonies, or would in the future.

LOL, RICK. I was hoping no one would notice I missed my usual Wednesday post. I DID start one, but it rambled on and on and I set it aside. I promise, I'll post something soon. I don't want the blog police after me!

I think, though this battle will lost, it's one skirmish. It's morning in America again, and there will be a new day.

I was very saddened that Prop 8 passed. What a blow for human rights!

Hi
I search to exchange link with other blogs
Are you interested by it ?
Thanks to answer me in my blog
http://darfour.over-blog.net/
bye

SIDNEY, I hope you're right.

CARLEEN, I agree. Human rights have suffered a lot of setbacks in the US in the past eight years. Let's hope people become less scared and more tolerant during President Obama's eight years.