Congratulations, Charles, on having two new sword-and-planet novels, Swords of Talera and Wings over Talera, published this spring by Borgo Press, and thank you for visiting my blog.

Thanks, Shauna. And thanks for inviting me today.

The Talera Cycle fantasy trilogy is being published by a small press, as was your 2002 horror novel Cold in the Light. What do you see as the major advantages and disadvantages of working with a small press? 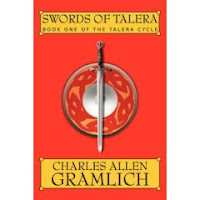 Well, the major disadvantage is money. Small presses don’t have much of it, so authors can’t expect any significant gob of cash up front. But, on the positive side, many small presses provide better royalty rates than the mainstream publishers, and if your book sells you can do OK. Small presses also typically don’t have much in their budgets for promoting writers either. An author really has to push their own work, but I think that’s become more common at the mainstream presses as well. Unless you’re a huge name.

An advantage of the small press is that the author can often have more input into covers and back cover copy than typical of mainstream publishers. And with many small press publishers the relationship between author and publisher becomes quite personal. I’ve very much appreciated the personal attention I’ve gotten from Borgo Press, and from The Invisible College Press before that.

In Swords of Talera, as in many fantasies, an ordinary person suddenly finds him- or herself in extraordinary circumstances in which the normal rules of life do not apply, and the person must become heroic to survive. Hundreds of thousands of us in southeastern Louisiana experienced just such an adventure after Hurricane Katrina. What heroic qualities did you discover in yourself after the hurricane? Did you rewrite any sections of Swords of Talera to reflect your new first-hand knowledge? 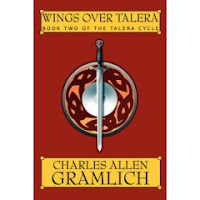 Swords of Talera was first written long before Katrina. But it was revised for paperback publication after Katrina. You’re absolutely right that many of us here along the Gulf Coast experienced the kind of dislocation after the hurricane that Ruenn Maclang did in Swords of Talera. Although I didn’t create any new scenes for the book solely based on my experiences during and after Katrina, I think that living through the tragedy of the storm added new depth to many of the revised scenes. I ended up spending two months in Austin, in a two-room apartment with lawn chairs for furniture, so I began to understand the dislocation that Ruenn suffers in the book. That certainly came through in the revisions.

I was amazed at the heroics shown by so many all along the Gulf Coast after Katrina, and the heroics of those who came from all over the country and from Canada and other countries to pitch in. I don’t know if I discovered any heroism in myself, but I saw and met many heroes in action and that certainly bled through onto the pages of the book.

You appear briefly in Swords of Talera as yourself. Was it difficult to create a character who was stripped down from flesh and blood and soul rather than built up from a skeleton? How did you go about turning yourself into a character?

There is a long tradition in Sword and Planet fiction, beginning with Edgar Rice Burroughs, of framing these stories with a connection to a real person who is being “told” the story or who has been given a “manuscript” or “tapes” that reveal the tale. I think it’s a fun tradition and wanted to honor it myself. I appear strictly in the introduction, however, and show up less and less throughout the introductions in the sequels. I have no plans to have myself transported to Talera, which is what the writer Lin Carter once did in one of his own Sword & Planet series.

As for it being hard, it was actually very easy, one of the easiest things I did in the book. There wasn’t really much “making it up” involved. I’ve been called a “character” anyway, usually with some pejorative adjective for a modifier.

Swords of Talera is an old-fashioned read, modeled after the books of Edgar Rice Burroughs and originally appearing in a magazine in serialized form. What do the Talera Cycle and Burroughs’ books offer readers that is missing in modern fiction?

Writers like Burroughs and Robert E. Howard knew that “story” is of paramount importance. Certainly you want great characters and interesting plots, but most people read for the story. Sometimes I think that many modern writers have forgotten that. They’ve become too self-conscious, or have been too heavily influenced by the slash-and-burn techniques of TV, and they’ve forgotten how much fun a “well-told tale” can be. Burroughs and Howard often had plenty going on under the skins of their stories, but they never forgot that a piece has to work as a “story” first.

One big publisher rejected Swords of Talera because they said it was too old-fashioned, but I took that rejection as a compliment because that was exactly what I hoped to achieve with this book. There’s still a lot of flesh on the bones of those old tales. To reject them because they’re not “the latest thing” is to follow a fad that will disappear itself before long.

The theme of freedom is an important one in Swords of Talera. Slaves constantly look for a means of escape, and complete strangers risk their lives to free slaves. Why did you choose this theme to be so prominent? Will later members of the trilogy have different themes?

Slavery has a long and complicated history in human affairs. Outside of murder, it’s arguably the worst thing one human can do to another. Slavery has touched almost every human society, past and present, and the legacy of slavery is still affecting our country’s history today. Growing up in the South, and teaching for the last 20 years at a predominantly African American university, has taught me a lot about the horrors that existed with slavery, and it is a topic that I’m interested in even though I find it difficult to understand how anyone could ever practice it.

As Ruenn Maclang says in the book, however, “chains are not always made of metal.” Actual slavery appears more prominently in Swords of Talera than in either of the sequels, but the whole trilogy is about freedom and about how we must be vigilant against those who would take it away from us, whether it be from outside our society, or from within.

The relationship between the protagonist, Ruenn, and the alien Jask is fascinating. What in the character of these two enemies allows them to forge a friendship and trust each other?

Jask and Ruenn may literally be from different worlds, but they have two things in common that made it inevitable that they’d come to like and respect each other. First, they each have a strong sense of personal honor, a sense that one pays one’s debts. Second, they both understood what it was like to be isolated and alone among their fellows.

Jask really wrote himself as a character and I enjoyed watching his growth very much. If I continue with the Taleran series he will certainly show up again.

How does being a psychologist influence how you create characters?

Long before I was a psychologist I was reading Burroughs’ John Carter of Mars series and the stories of a hundred other writers of adventure fantasy, like Robert E. Howard, Andre Norton, Poul Anderson, and Kenneth Bulmer. The characters in the Talera books owe much more to the great writers who came before me than they do to my formal training in psychology. While I consciously work psychological elements into the characters and plots of my horror fiction, as with Cold in the Light, I made no attempt to do so in the Talera trilogy. We’re all a product of our experiences and training, of course, so there may be psychological elements to the stories that I don’t even recognize myself. If so, they’re largely accidents.

Thank you again for allowing me to interview you.

My pleasure. Great questions. They really made me think.

You can purchase Swords of Talera and Wings over Talera at Amazon.com. Charles Allen Gramlich maintains a blog about writing, Razored Zen, at http://charlesgramlich.blogspot. com/.

Hey, it came out great, Shauna. Thanks very much for running this. It was fun.

I love how your blog is turning out, Shauna. Not only do your questions offer an exploration of the minds of the authors you interview--they also make me think about how and why I write what I choose to write.

Charles, Susan, Roz--thanks for dropping by and leaving such nice comments. I will continue posting occasional interviews if the authors I ask are as generous with their time and thoughts as Charles and Farrah were.

Great post. As I said regarding Farrah's interview, I love learning more about other writers and their writing processes. Although Charles is a friend, and we've belonged to the same weekly writers' group for several years, I learned new things about him in the interview. Your questions were excellent and insightful, and his answers thoughtful and articulate.

Thanks for conducting this interview. Loved it!

Thanks, Sphinx Ink and Erik, for your kind words. Glad you could drop by.

This is a thoughtful interview with great questions and some fascinating answers. I really enjoyed it.

Thanks, Lisa. It helped that I had an interesting person to interview!